Extending the President's Tax Cuts and AMT Relief Would Cost $4.4 Trillion Through 2018

President Bush continues to urge that the tax cuts enacted in 2001 and 2003 be made permanent.  Despite the severe long-term budget shortfalls the nation faces, the Administration has not proposed measures to offset the cost of extending these tax cuts.  Nor has it proposed measures to pay for extending relief from the Alternative Minimum Tax, which, if left unchanged, will affect increasing numbers of middle-income taxpayers and take back a substantial portion of the value of the 2001 and 2003 tax cuts (see the box below).

The costs of extending the tax cuts would be piled on top of the cost of already enacted tax cuts:

In fiscal year 2007, the cost of tax legislation enacted since 2001, including interest costs, amounted to $300 billion.  The fiscal year 2007 budget deficit totaled $162 billion.  Thus, while the President now seeks to balance the budget in 2012, the budget would have been balanced already had tax legislation passed since 2001 not been enacted or been fully paid for.

Why We Include the Cost of AMT Relief in Our Estimates

The President’s fiscal year 2009 budget calls for extending relief from the Alternative Minimum Tax for only one year, 2008.*  Including the cost of a permanent AMT fix, however, gives a much better estimate of the true cost of the President’s proposed tax policies.  If AMT relief is not extended, a substantial share of the value of the 2001 and 2003 tax cuts — which the President wants to make permanent — will be taken back by the AMT.

According to the Urban Institute-Brookings Institution Tax Policy Center, the AMT will take back almost a third of the President’s tax cuts by 2012.  When the President urges that his tax cuts be made permanent, he presumably does not mean only the two thirds of the tax cuts that would remain if the AMT were left unchanged.

Indeed, much of the cost of AMT relief reflects the cost of providing taxpayers with the full value of the President’s tax cuts (see Figure 2).  The cost of providing AMT relief from 2001 through 2018, assuming that the tax cuts are extended, will be almost three times what it would have cost to provide relief from the growth in the AMT that would have occurred in the absence of the tax cuts.*

In this analysis, we provide estimates of the full cost of extending the 2001 and 2003 tax cuts and AMT relief through 2018.  This is what it would cost the nation to extend the President’s tax cuts and provide the AMT relief required to ensure those tax cuts would not be cancelled out in significant part by the AMT.  Of the $4.4 trillion cost (including interest), about $500 billion reflects the cost of addressing the AMT problem that existed prior to 2001 (that is, the AMT problem that would still have existed had the 2001 and 2003 tax cuts not been enacted).  The remaining $3.9 trillion reflects the cost of the President’s tax policies. 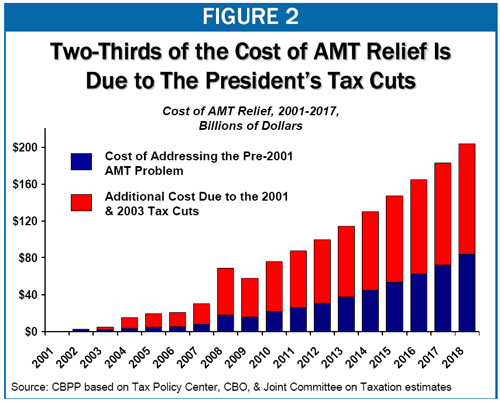 CBPP projections (which are based on Congressional Budget Office data) show the outlook for the federal budget under current policies is bleak, even if the tax cuts expire or are fully offset.[1]  Under those circumstances, the national debt would reach 105 percent of GDP by 2050.

Thus, the tax policy decisions that Congress will make over the next few years will have a profound impact on the nation’s fiscal future.  While putting the nation on a sustainable fiscal path will be very difficult in any case, it will be far more difficult if the tax cuts are made permanent without offsets.

The Tax Cuts' Impact on the Economy

The President and members of the Administration routinely argue that the tax cuts should be made permanent for the sake of the economy.  This argument does not withstand scrutiny.

Extending Other Expiring Tax Provisions Would Add to Costs

According to the Congressional Budget Office and the Joint Committee on Taxation, making all of these provisions permanent would cost about $400 billion between 2009 and 2018, or about $500 billion if interest costs are included.  Thus, the cost of extending all expiring tax provisions, including the 2001 and 2003 tax cuts, AMT relief, and the “extenders” would total $4.1 trillion over the 2009 to 2018 period, or $4.9 trillion including interest.

Moreover, compared with other post-World War II recoveries, the recovery that began in 2001 is well below average.  If tax cuts are crucial to economic growth, then that recovery should stand out brightly in comparison to previous recoveries.  It should certainly outshine the comparable years of the 1990s recovery, during which taxes were increased.  Instead, with respect to overall economic growth, as well as growth in consumption, investment, wages and salaries, and employment, the expansion that began in 2001 is either the weakest or among the weakest since World War II.  Investment, wage and salary, and employment growth also have been significantly weaker than during the 1990s.  (These comparisons held true even before the slowdown of the past few quarters began. [3])

Further, as discussed above, making the tax cuts permanent without paying for them would dramatically increase deficits and debt in future decades.  A number of studies by highly respected institutions and economists have found that, if major tax cuts are deficit-financed, the negative effects of higher long-term deficits are likely to cancel out or outweigh any positive economic effects that might otherwise have resulted from the tax cuts.[4]  All else being equal, large deficits lower national savings and thereby lower future national income.  For instance, a comprehensive study of the 2001 and 2003 tax cuts by Brookings Institution economist William Gale and then-Brookings Institution economist (now CBO director) Peter Orszag found that making the tax cuts permanent without offsetting their cost would be “likely to reduce, not increase, national income in the long term.”[5]  The bottom line is that large deficit-financed tax cuts are as, or more, likely to reduce investment and economic growth as to increase them.

In an analysis of the long-run budget situation, the Congressional Budget Office commented that the economic benefits associated with maintaining lower marginal tax rates “are small compared with the economic benefits of moving the budget onto a sustainable track.”[6]  By doubling the size of the fiscal problem through 2050, extending the tax cuts without paying for them would make this far more difficult to do.  It would be imprudent not only in light of the effects on the federal budget but also in light of the likely effect on the U.S. economy. 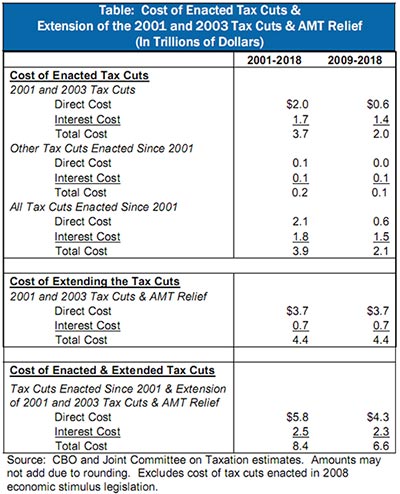 [3] For further discussion, see Aviva Aron-Dine, Chad Stone, and Richard Kogan, “How Robust Is the Current Economic Expansion?” Center on Budget and Policy Priorities, revised January 14, 2008, https://www.cbpp.org/8-9-05bud.htm.  For discussion of the claim that extending the tax cuts would provide economic stimulus and help the economy recover from its current slow-down, see Aviva Aron-Dine, “Another Misdiagnosis:  Marginal Rate Reductions and Extensions of Tax Cuts Expiring in 2010 Not the Right Medicine for the Economy’s Short-Term Ills,” Center on Budget and Policy Priorities, January 15, 2008, https://www.cbpp.org/1-15-08tax.htm.