Chart Book: The Legacy of the Great Recession

This chart book will not be updated with new data. For economic growth and labor market developments beyond the period covered here, see the Tracking the Post-Great Recession Economy chart book.

The United States’ longest, and by most measures worst, economic recession since the Great Depression began in December 2007 and ended in June 2009. The Great Recession cast a long shadow over the economic expansion that followed, however, and labor market conditions improved steadily but slowly for several years before the economy began closing in on full employment between 2015 and 2017.

This chart book documents the course of the economy from the start of the recession through 2017. It shows how deep a hole the Great Recession created — and how much deeper that hole would have been without the financial stabilization and fiscal stimulus policies enacted in late 2008 and early 2009. And it documents the return to stronger labor market conditions by the end of the period.

The Economy Began Growing in Mid-2009

The financial crisis turned what might have been an ordinary economic downturn into the Great Recession in the second half of 2008. Economic activity as measured by real (inflation-adjusted) gross domestic product (GDP) was contracting sharply when policymakers enacted the financial stabilization bill (TARP) and the American Recovery and Reinvestment Act. The economy began growing in 2009 and averaged 2.2 percent annual growth from mid-2009 through the fourth quarter of 2017.

The pace of monthly job losses slowed dramatically soon after President Obama and Congress enacted the Recovery Act in February 2009. The trend in job growth in 2010 was obscured by the rapid ramp-up and subsequent decline in government hiring for the 2010 census, but private employers added 18.0 million jobs to their payrolls in 94 consecutive months of job creation from March 2010 through December 2017, an average of 191,000 jobs a month. Total employment (private plus government) rose by 17.9 million (190,000 a month) over the same period as federal, state, and local government were net job losers. Federal government employment fell by 77,000 jobs, state government rose by 17,000, and local government fell by 27,000. These government job losses contrasted sharply with past recoveries, when government job creation was an important contributor to job growth.

Part II: The Recession Put the Economy in a Deep Hole

For a half century prior to the Great Recession, actual GDP, which is determined by the demand for goods and services, fluctuated in a relatively narrow range around the Congressional Budget Office (CBO)’s estimate of what the economy was capable of supplying on a sustainable non-inflationary basis (potential GDP). Actual GDP fell below potential in recessions and temporarily rose above it in booms. The Great Recession created an unusually large and long-lasting gap between actual and potential GDP. That “output gap” was manifested in substantial excess unemployment and underemployment and idle productive capacity among businesses.

Although the output gap was essentially closed in late 2017, according to CBO’s August 2018 Economic and Budget Outlook estimates, the agency’s estimates of both the level and growth rate of potential GDP for 2007-2017 are now much lower than the projections made just before the start of the Great Recession.

(The chart is constructed so that a straight line represents a constant growth rate, with a steeper slope representing a higher growth rate.)

Great Recession’s Jobs Deficit Much Deeper Than in Previous Recessions

Job losses in the Great Recession were huge, and it took much longer than in previous recessions simply to get back to the level of payroll employment at the start of the recession. Employers did not begin to add jobs until 2010. Progress erasing the jobs deficit was slow for some time, but by mid-2014 the economy had recovered the 8.7 million jobs lost between the start of the recession in December 2007 and early 2010 and continued to add jobs thereafter. Job creation greater than what was required to keep up with potential labor force growth (the pace of job creation that’s appropriate once the economy is back to full health) continued to bring people back into the labor force and lower the unemployment rate. Nonfarm payroll employment was 6.6 percent (9.2 million jobs) higher in December 2017 than it was at the start of the recession.

The Unemployment Rate Rose to Near Its Postwar High

The unemployment rate rose far higher than in the previous two recessions and far faster than (though not quite as high as) in the deep 1981-82 recession. Technically, the recession ended in June 2009 as the economy began growing again, but the unemployment rate did not fall to 5.0 percent, where it was at the start of the recession, until late 2015. It reached 4.1 percent in late 2017.

The relatively modest pace of job growth (relative to the size of the job losses) in the first years of the recovery kept the unemployment rate high long after the end of the recession. This is similar to what happened in the previous two recessions and does not resemble the fairly rapid decline that followed the severe 1981-82 recession. The unemployment rate at the end of 2017 was much lower than it was early in the recovery, but indications remained that there were still people who were not working but wanted to be and people who would have liked to be working full time but could only find part-time jobs who could be pulled back into the labor market or get the hours they wanted if job creation remained strong. 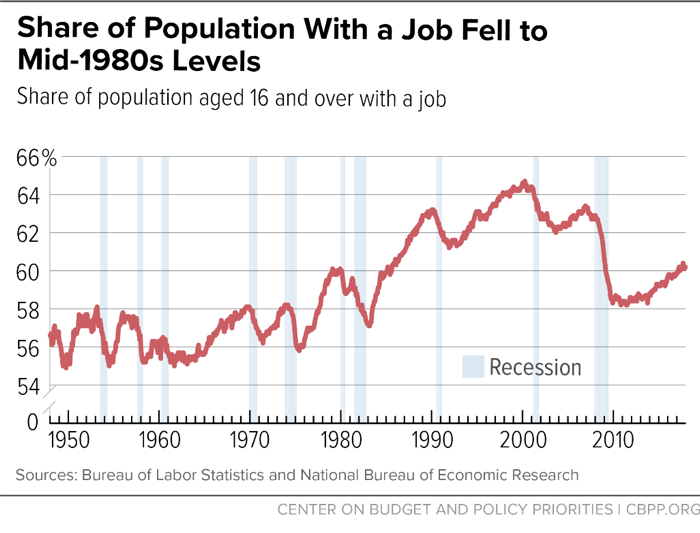 The Labor Department’s most comprehensive alternative unemployment rate measure — which includes people who want a job but are classified as “marginally attached” to the labor force because they have not looked for work recently enough to be officially unemployed and people working part time because they can’t find full-time jobs — recorded its highest reading on record in November 2009 in data that go back to 1994. After falling to 8.0 percent in October 2017 — the lowest it had been since early 2007 — this rate edged up to 8.1 percent at year’s end. That was still lower than it was in the year before the Great Recession, but more than a percentage point higher than it was in 2000.

Growth in Workers’ Earnings Was Modest

Average hourly earnings of employees on private payrolls grew modestly through much of the recovery; growth averaged 2.2 percent annually through 2017. Inflation was modest as well, but over much of the economic recovery, real (inflation-adjusted) wages hardly grew and they failed to keep up with increases in workers’ productivity (output produced per hour of work).

As a result, the share of national income going to profits rose relative to that going to wages. Both inflation and productivity fluctuated more than nominal earnings during this period but, on average, productivity rose at roughly 1.1 percent per year from the end of the recession through 2017 and the cost of a typical worker’s market basket rose about 1— percent per year over the same period.

Low inflation in 2015 and 2016 led to solid real wage gains, but those gains cannot be sustained in the face of higher future inflation without faster nominal wage growth.

At one point at the beginning of the recovery, seven people were looking for work for every job opening. By 2017, however, that ratio had declined to near its historic low, reached just before the 2001 recession in data that go back to December 2000. In December 2017, nearly 6.6 million workers were unemployed, compared with nearly 6.2 million job openings (a ratio of roughly 106 job seekers for every 100 job openings).

Part III: The Great Recession Would Have Been Even Worse Without Financial Stabilization and Fiscal Stimulus Policies

GDP Would Have Been Lower Without Recovery Act

Unemployment Would Have Been Higher Without Recovery Act