A Big Increase or a Modest Offset To Recent Cuts?

On May 11, the Director of the Office of Management and Budget sent a letter to Congress on behalf of the Bush Administration, threatening to veto any 2008 appropriations legislation that exceeds the levels requested by President Bush.  As apparent justification for the threat, the OMB letter charged that the congressional budget plans approved by the Senate and the House of Representatives would “increase federal spending by hundreds of billions of dollars.”  Three points stand out.

The remainder of this analysis discusses the level of non-defense funding assumed in the new Congressional budget plan that the House and Senate conferees have approved.  That level entails modest increases above 2007 levels.  Either as a share of the economy or when funding levels are adjusted for inflation and population growth, the non-defense funding levels for 2008 and subsequent years that are included in the new budget plan are lower than the levels provided in recent years.  It is ironic that the President might veto non-defense appropriations that constitute a smaller share of the economy and the budget, and that provide lower levels of services (i.e., are lower in real per capita terms) than earlier appropriations that he willingly signed.

Funding Levels for 2008 in the New Congressional Budget Resolution

The Congressional budget resolution approved by House and Senate conferees calls for $956.1 billion in funding for 2008 for annually appropriated, or “discretionary,” programs.  Of this total amount, $503.8 billion — the amount requested by President Bush — is intended for national defense, leaving $452.3 billion for non-defense discretionary programs.  (Note: these figures include $2 billion effectively made available in 2008 by a change in the restriction on advance appropriations for 2009; see the box on page 4).

The Congressional budget plan assumes that funding for non-defense appropriations for 2008 will be increased by $13.5 billion, or 3.1 percent, above the CBO baseline level, which equals the 2007 funding level, adjusted only for inflation.  (See Table 1.)  President Bush’s budget, in contrast, calls for non-defense funding to be cut $9.7 billion, or 2.2 percent below the CBO baseline.

A 3.1 percent funding increase is not especially large, and with this increase, 2008 funding for non-defense appropriations would remain modest by recent historical standards.  When inflation and population growth are taken into account, funding for non-defense appropriations in 2008 under the new budget plan would be below the levels of funding provided in 2002, 2003, 2004, and 2005.  The 2008 funding level would be more than 6 percent below the level reached in 2004, after adjusting for inflation and population growth.[2]  (See Figure 1 on page 3.)

The story is particularly striking when non-defense funding is examined as a share of the economy.  As a share of the Gross Domestic Product (the basic measure of the size of the U.S. economy), non-defense discretionary funding would be lower in 2008 under the new congressional budget plan than the 1990-2007 average.  It also would be lower than inevery year from 2001 through 2006, and almost one-seventh below the levels reached in the years 2002-2004.  (See Figure 1.) 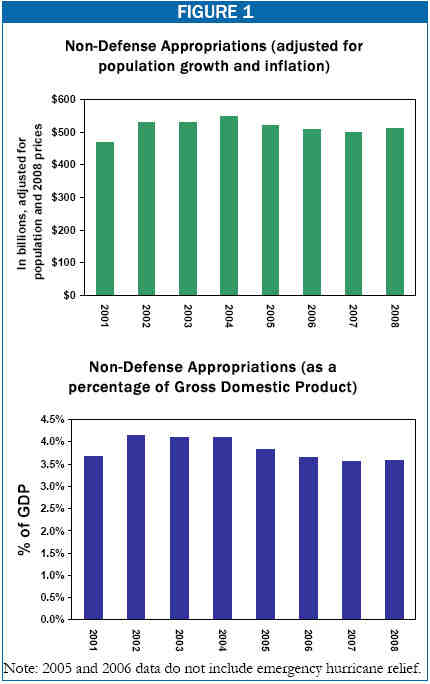 The new congressional budget plan also contains appropriations targets for each year through 2012.  The figures after 2008 do not constitute binding limits, because they likely will be revised in subsequent congressional budget plans.  Nonetheless, it should be noted that the levels in 2009 through 2012 are increasingly constrained.  While the dollar level of the targets will grow each year in nominal terms, the level of funding will continue to fall as a share of GDP, shrinking to 3.2 percent of GDP by 2012.  This appears to be the lowest level of funding as a share of GDP since the Hoover Administration.

What does the $452.3 billion figure represent?  What does it include?

* The Congressional budget resolution does not directly provide any 2008 funding.  Actual funding will be provided in the various appropriations bills that Congress will debate over the course of the summer and fall.

** Defense appropriations, which cover ongoing activities of the Department of Defense plus the costs of the Iraq and Afghanistan wars, account for about a fifth of the budget.  About two-thirds of the budget, including funding for entitlement programs like Social Security and Medicare, and interest on the debt, sits outside of the control of the Appropriations Committees.

[1] All figures in this analysis exclude “emergency” funding for the Iraq and Afghanistan wars and other purposes; consequently, defense increases discussed in this analysis are for purposes other than prosecuting those wars.

[2] In portraying the funding levels in the congressional budget resolution and those in earlier years in real per-person terms (this paragraph) and as a percentage of GDP (next paragraph), we have adjusted all figures to account for timing and scorekeeping anomalies that would otherwise distort year-to-year comparisons.  For a discussion of these adjustments, see the Appendix of “The Omnibus Appropriations Act: Are Appropriations for Domestic Programs out of Control?” Center on Budget and Policy Priorities, February 1, 2004.  (The biggest adjustment is to include discretionary amounts for highway and mass transit programs, which are not officially counted as discretionary “budget authority” but should be.)  The congressional budget plan does not make the detailed program assumptions we would need to adjust the assumed 2008 funding levels in the same way that we have adjusted prior funding levels.  For comparability we assume that the amount of these adjustments — such as the level of funding fro highway programs — will grow from 2007 to 2008 at the same rate as officially scored budget authority, for which we have both historical data and the figures in the congressional budget plan.

Had we made no adjustments to official funding figures, the essential conclusions of these two paragraphs would still be the same: the non-defense funding level for 2008 that is reflected in the congressional budget plan is lower in real per-person terms than the funding actually provided in 2002-2005, and is lower as a percentage of GDP than the funding actually provided in 2001-2006.