Included in the legislation are provisions that would establish statutory caps for each of the next three years on overall levels of funding for discretionary programs (i.e., programs that are non-entitlements).  Under the proposal, the caps for fiscal years 2007, 2008, and 2009 would be set at the overall level for discretionary programs proposed for each of those years in the budget that the President submitted to Congress in February.

Moreover, the Gregg bill would set a statutory cap for fiscal year 2007 that is more than $7 billion belowthe level that would be established under the budget resolution the Senate approved on March 16.  The Gregg bill would enforce these caps by triggering automatic across-the-board cuts in discretionary programs if the caps would otherwise be exceeded.

Chairman Gregg’s proposal to set discretionary caps for each of the next three years at the level of funding proposed by the President would necessitate steep cuts in domestic discretionary programs over the three years, unless defense and international programs are funded at levels well below those the President has requested. 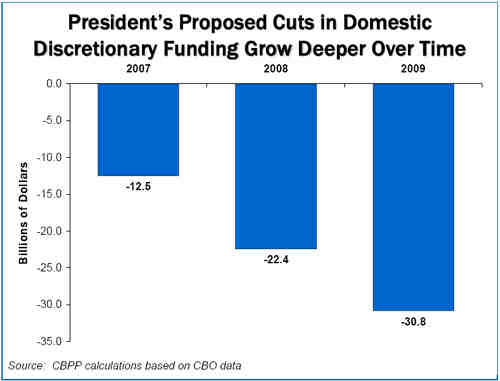 Proposed Caps Depart from the Successful Experience in the 1990s

The cuts that the proposed caps would necessitate depart sharply in two respects from the experience with discretionary caps in the 1990s, when such caps proved effective.  First, the caps in effect through most of the 1990s were part of larger, carefully balanced deficit-reduction packages.  Both in 1990 when discretionary caps were first established and in 1993 when they were extended, discretionary caps were instituted as part of broad deficit-reduction legislation that combined restraint on discretionary programs with increases in taxes (particularly for those who could best afford to pay more) and specific reductions in entitlement programs (in part by reducing Medicare payments to health-care providers).  The discretionary caps of the 1990s also were accompanied by “Pay-As-You-Go” rules that required both entitlement expansions and tax cuts to be offset fully.  In short, the discretionary spending caps of the 1990s were part of a larger program of shared sacrifice that was spread acrossthe population and that played a major role in addressing the large deficits of that era.

Chairman Gregg’s new cap proposal is different.  It is not part of a balanced plan of deficit reduction in which legislation is enacted that increases revenues and achieves specific savings in entitlement programs.  Instead the cap proposal is part of a plan that promises future unspecified cuts in entitlement and discretionary spending (to be achieved through automatic across-the-board cuts and/or fast-track consideration of legislation proposed by Republican-dominated commissions if Congress continues to avoid making the difficult specific cuts in programs) while not only exempting taxes from the automatic budget mechanisms but allowing continued, deficit-financed tax cuts that would not be subject to any fiscal discipline.

Why the Proposed Caps Are Ill-Advised

This analysis finds Chairman Gregg’s proposal to cap funding for discretionary programs at the levels proposed in the President’s budget for the next three years to be ill-advised.  The caps would be inequitable.  They also would be likely to do more to hinder fiscal discipline than to advance it.  The proposed discretionary caps have at least five basic flaws.

Enactment of the proposed three-year caps on discretionary programs at this time would be both inequitable and unwise.  The proposal by Chairman Gregg to cap discretionary spending at the levels proposed by President Bush is designed to lock in substantial reductions in a very broad array of domestic discretionary programs.  These cuts would not be part of a comprehensive, balanced approach to deficit reduction, as the multi-year caps established in the early 1990s were.

In addition, the establishment of discretionary caps at the President’s proposed levels of spending at this time would likely make it harder in the next few years to craft a large bipartisan deficit-reduction measure that seeks shared sacrifice from all parts of the budget.  Advocates of cuts in domestic discretionary programs would already have achieved their goal, making it harder to induce them to support cuts in defense or increases in revenues in return for constraints on domestic programs.  Conversely, advocates of domestic discretionary programs would be unlikely to support any deal that calls for even deeper cuts in those programs.

[1] This analysis uses a CBO baseline that has does not assume that the same level of emergency discretionary funding enacted for 2006 (for the war in Iraq and Afghanistan, hurricane relief, and for other purposes) will be provided for 2007 and each succeeding year.  For comparability, emergency funding proposed by the President for 2007 is also excluded from the analysis.

[2] The President’s budget proposed that caps also be established for 2010 and 2011, with the assumed cuts in domestic discretionary funding under those caps growing to $47 billion in 2011.

[3] The caps allowed emergency expenditures under circumscribed conditions.  Through 1998, emergency funding was used only for the Gulf War and major natural disasters.

[4] It also may be noted that the Senate voted during its recent consideration of the budget resolution for 2007 to increase total funding for discretionary programs in 2007 to a level more than $7 billion above the President’s proposed cap level for that year (not counting emergency funding proposed in the Senate budget plan or the President’s budgets).  Taking into account the effects of an amendment by Senator Specter (R-PA) dealing with advance appropriations that the Senate adopted, the budget resolution passed by the Senate made room for more than $14 billion more in domestic discretionary funding for fiscal year 2007 than the amount that the President proposed.