Policymakers need to replenish the Social Security Disability Insurance (DI) trust fund by late 2016, but that necessity comes as no surprise and poses no crisis.  Although the DI trust fund is legally separate from the much larger Old-Age and Survivors Insurance (OASI) trust fund, both are integral parts of Social Security.  Traditionally, lawmakers have divided the total payroll tax between OASI and DI according to the programs’ respective needs.  Workers’ paychecks simply show a deduction for “Social Security tax,” and few know — or have reason to care — how that amount is apportioned.

When lawmakers last redirected some payroll tax revenue from OASI to DI in 1994, they expected that step to keep DI solvent until 2016 given anticipated economic and demographic trends.  Despite fluctuations in the meantime, current projections still anticipate depletion of the trust fund in 2016 as forecast.

DI’s anticipated trust fund depletion does not indicate that the program is out of control or that it is “bankrupt;” if the trust fund were depleted and policymakers took no action, the program could still pay about 80 percent of benefits.  But cutting benefits by one-fifth for an extremely vulnerable group of severely disabled Americans is unacceptable.

DI’s finances should ideally be addressed in the context of legislation to restore overall Social Security solvency.  But even if policymakers make progress toward a well-rounded solvency package before late 2016, which seems unlikely, any changes in DI benefits or eligibility would surely phase in gradually and hence do little to fully replenish the DI fund by 2016.  Consequently, policymakers would still need to reallocate payroll tax revenues between the two programs.  There is nothing novel or controversial in such a step, and failing to take it would be irresponsible.

Payroll Tax Reallocation Is Nothing New

The current Social Security tax is 6.2 percent of wages up to $117,000 in 2014, paid by both employers and employees.  Of this total, 5.3 percent of covered wages goes to the OASI trust fund, and 0.9 percent goes to the DI trust fund.  This allocation reflects the decision of policymakers in 1994, when they last reallocated taxes between the programs.

Congress has reallocated payroll tax revenues many times in the past — and in both directions.  This is a traditional and historically noncontroversial step.

As then-Congressman Jake Pickle stated in 1980 during consideration of legislation to reallocate payroll taxes between Social Security’s two programs, “[T]he bill we bring today is a deliberate step both to [ensure] the stability of the trust funds and to provide the Congress the time it will need to make any further changes necessary….Reallocation, the mechanism used in [H.R.] 7670, has been the traditional way of redistributing the [Old-Age, Survivors, and Disability Insurance, or OASDI] tax rates when there have been changes in the law and in the experience of programs and in order to keep all the programs on a more or less even reserve ratio.”[2]

The last major reform of Social Security occurred in 1983.  At the time, DI was in relatively strong financial shape, while OASI faced insolvency within a few months.[3]  The Social Security Amendments of 1983, while addressing the OASI shortfall, slightly raised DI’s cost and cut DI’s share of the payroll tax.  That financial harm was only partly mitigated by the tax-rate reallocations enacted in 1994.

The 1983 amendments had many provisions intended chiefly to address the OASI shortfall — such as covering new federal employees, delaying cost-of-living adjustments, imposing income tax on a portion of Social Security benefits, accelerating a scheduled payroll tax increase, and so forth — but one of the most important was raising the full retirement age (FRA).  The FRA climbed from 65 to 66 between 2000 and 2005 and will rise again from 66 to 67 between 2017 and 2022.

This change to the FRA worsened the DI trust fund.  Disabled workers are reclassified as retired workers when they reach the FRA (without any change in their monthly benefit).  Raising the FRA delayed this switch from disability to retirement benefits from age 65 to age 66 and ultimately to 67 and therefore increased DI’s costs even while lowering Social Security costs overall.

In addition, the 1983 amendments cut DI’s share of the payroll tax.  Under the law in effect before the amendments, DI’s share of the payroll tax was 0.825 percent and was scheduled to rise to 1.1 percent by 1990.  The 1983 law trimmed DI’s share to 0.5 percent in 1984 through 1987, with gradual increases in subsequent years, finally leveling off at 0.71 percent in 2000 and beyond.  This reduction in the DI share allowed for a parallel increase in the OASI share to address its financial problems as the major reforms enacted in 1983 phased in.

Overall, according to the 1983 Trustees Report, the 1983 amendments reduced Social Security’s long-run deficit by 2.09 percent of taxable payroll — consisting of a 2.89 percent improvement in OASI and a 0.80 percent deterioration in DI.[4]

After the amendments, both funds were projected to be solvent through about 2060, based on the economic and technical assumptions of the time.  As it turned out, however, 1983-1985 were years when the share of workers receiving DI benefits was at a record low — the result of an overzealous Reagan Administration crackdown that encountered bipartisan resistance from governors, the courts, and Congress.[5]  DI enrollment and costs rose gradually from their 1983 trough, and DI’s share of the payroll tax turned out to be insufficient.  By the early 1990s, the DI trust fund began to run into financial problems, prompting Congress to again adjust the allocation of payroll tax receipts.  The 1994 reallocation boosted DI’s share but still held it (in the long run) to 0.9 percent, significantly below the rate that had been scheduled before the 1983 amendments.  This is the rate that prevails today.  (See Figure 1 and Appendix Table 1.)[6]

The drafters of the 1983 amendments did not deliberately underfund DI.  They used the best information available to them at the time.  If DI’s tax rate had been 1.1 percent for the last two decades, as it would have been without the 1983 amendments, we would not face the need to replenish the fund today.

After the 1994 reallocations, the trustees estimated that the DI fund would become depleted in 2016, OASI in 2031, and the combined funds in 2030.  In the 2014 report, the trustees put those dates at 2016, 2034, and 2033.[7]  Thus, despite the fluctuations over the past two decades, the projections made at the time of the last reallocation in 1994 have proven to be remarkably accurate, reinforcing the view that the DI shortfall is not a surprise or a reflection of a program that has somehow grown “out of control” in recent years.  Indeed, most of the increase in DI spending is the result of demographic and other factors that are well understood.[8]

Since the disability and retirement programs are closely linked, it would be best to replenish the DI trust fund as part of a package that restores solvency to the Social Security program as a whole — that is, that extends the solvency of both trust funds well beyond 2033.  That prospect seems highly unlikely to occur, however, between now and 2016.

In the absence of any changes, DI’s share of the payroll tax will be sufficient to cover only about 80 percent of the cost of current benefits starting in late 2016, according to the trustees.  Without corrective action, DI benefits would thus have to be cut by about 20 percent across the board.  Since benefits are modest (about $1,150 a month, on average) and beneficiaries have low incomes — one-fifth of DI beneficiaries live below the poverty level, and half have total family incomes below $30,000 a year[10] — Congress must not allow that to happen.

To prevent that, policymakers need to reallocate payroll tax revenues, modestly increasing DI’s share.  Some reallocation will clearly be required, even if policymakers can agree on a comprehensive solvency plan for Social Security, because any cuts in DI benefits would doubtless be phased in over time and are likely to be relatively modest.  Thus reallocation, a step that policymakers have taken many times in the past, will be an essential part of any solution to address DI’s financial problems in 2016.

[1] For a full history of the relevant legislation, see the Social Security Administration’s collection at http://ssa.gov/history/legislativehistory.html, also summarized in Geoffrey Kollmann, Social Security: Summary of Major Changes in the Cash Benefits Program, May 18, 2000, http://www.socialsecurity.gov/history/reports/crsleghist2.html.

[4] See Table 33 on page 4 in the 1983 Annual Report of the Board of Trustees of the Federal Old-Age and Survivors Insurance and Federal Disability Insurance Trust Funds, http://www.ssa.gov/history/reports/trust/1983/1983c.pdf. 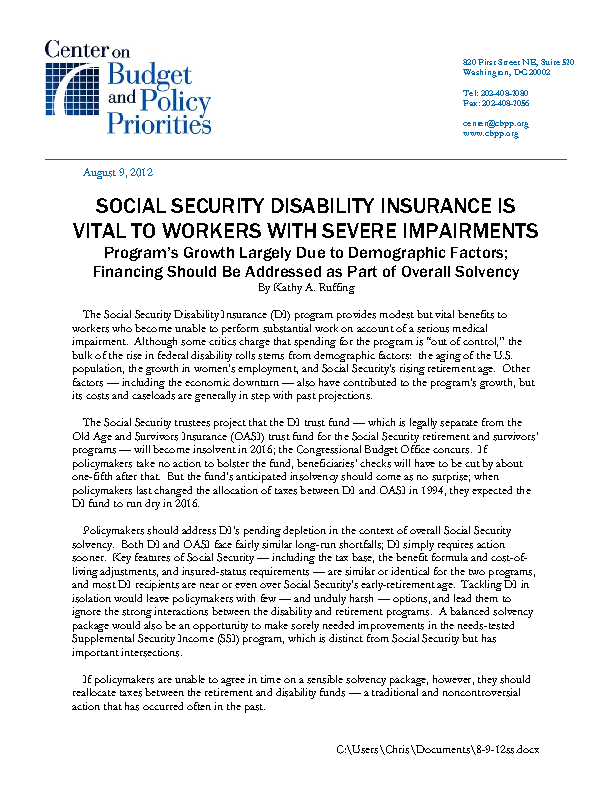 [6] For a comparison of scheduled tax rates and allocations before and after the 1983 Amendments, see Table A in John A. Svahn and Mary Ross, “Social Security Amendments of 1983: Legislative History and Summary of Provisions,” Social Security Bulletin, July 1983, http://www.ssa.gov/policy/docs/ssb/v46n7/v46n7p3.pdf.  For the revised allocations after the 1994 act, see the 1995 Trustees Report, op. cit.

[8] Kathy Ruffing, How Much of the Growth in Disability Insurance Stems from Demographic Changes? Center on Budget and Policy Priorities, January 27, 2014, http://www.cbpp.org/cms/index.cfm?fa=view&id=4080.