| By Aviva Aron-Dine and Richard Kogan

In recent statements, the President, the Vice President, and key Congressional leaders have asserted that the increase in revenues in 2005 and the increase now projected for 2006 prove that tax cuts “pay for themselves.” In other words, the economy expands so much as a result of tax cuts that it produces the same level of revenue as it would have without the tax cuts.

President Bush, for example, commented on July 11, “Some in Washington say we had to choose between cutting taxes and cutting the deficit….  that was a false choice.  The economic growth fueled by tax relief has helped send our tax revenues soaring.”[1]  Earlier, in a February speech the President stated, “You cut taxes and the tax revenues increase.”[2]  Similarly, Vice President Cheney has claimed, “it’s time for everyone to admit that sensible tax cuts increase economic growth and add to the federal treasury.” [3]  And Majority Leader Frist has written that recent experience demonstrates, “when done right, [tax cuts] actually result in more money for government.”[4]

In fact, however, the evidence tells a very different story: the tax cuts have not paid for themselves, and economic growth and revenue growth over the course of the recovery have not been particularly strong. 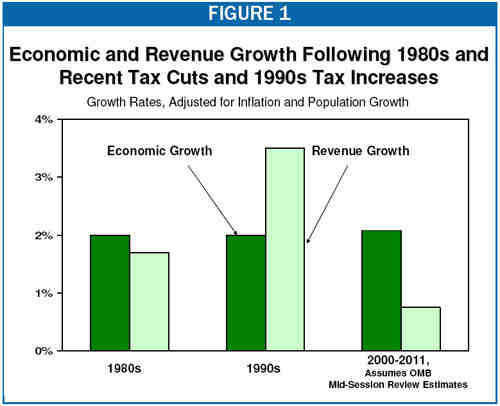 In addition, economists from across the political spectrum — including economists who have held top positions in the current Administration — reject the argument that tax cuts pay for themselves (see the discussion of this issue on page five).  In tax policy, as in other aspects of policymaking, there is no “free lunch.”

Have the Tax Cuts Increased Revenues?

After adjusting for inflation and population growth, this year and last year’s strong growth in revenues have barely made up for the deep revenue losses in 2001, 2002, and 2003.  Measured since the current business cycle began in March 2001, total per-capita revenue growth, adjusted for inflation, has been near zero.  Based on OMB’s latest revenue estimates, real per-capita revenues in 2006 will be only 0.2 percent above the level they attained more than five years ago at the start of the business cycle.  In other words, the current revenue “surge” is merely restoring revenues to where they were half a decade ago.

Could the Tax Cuts Pay for Themselves Over Time?

Proponents of the tax cuts might argue that the stronger revenue growth in 2005 represents the beginning of a trend and that the tax cuts will pay for themselves over time.  This claim is contradicted by the historical record, as well as by the Administration’s own projections.

Tax Cuts Have Not Paid for Themselves in the Past

In 1981, Congress substantially lowered marginal income-tax rates on the well off.  In 1990 and 1993, by contrast, Congress raised marginal income-tax rates on the well off.  When the 1981 tax cuts were being debated, some supporters contended the tax cuts would more than pay for themselves.  Similarly, opponents of the 1990 and 1993 tax increases claimed they would damage the economy and cause tax receipts to grow more slowly in the 1990s than in the 1980s.

The revenue estimates in OMB’s Mid-Session Review show that even the Administration does not expect the tax cuts to produce revenue growth that would make up for their costs.  Based on the Mid-Session Review projections for revenues in 2006-2011, real per-person revenues will grow at an annual average rate of 0.8 percent between 2000 and 2011, only about half the growth rate during the 1980s and less than one-fourth the growth rate during the 1990s.

These results are especially striking given that the Administration’s revenue estimates are highly inflated in one key respect — they assume that relief from the Alternative Minimum Tax (AMT) will not be extended beyond 2006, with the result that 30 million households will pay the AMT by 2010.  Virtually all observers expect AMT relief to be continued.  If the Administration’s revenue estimates are adjusted by using CBO’s estimates of the cost of continuing AMT relief, the estimates then show real per-capita revenue growth over the 2000-2011 period averaging only 0.5 percent per year.

In addition, the Treasury Department’s own recent “dynamic analysis” of the effects of making the President’s tax cuts permanent shows that the tax cuts would not come anywhere close to paying for themselves.  In the Treasury study's more optimistic scenario, extending the tax cuts could eventually increase long-run economic output by a total of 0.7 percent of GDP, which is enough to pay for, at most, 10 percent of the tax cuts’ cost.[11]

In recent testimony before Congress’s Joint Economic Committee, Edward Lazear, current chairman of President Bush’s Council of Economic Advisors, stated, “I certainly would not claim that tax cuts pay for themselves.”[12]

In its most recent Budget and Economic Outlook report issued in late January, 2006, CBO revised upward its estimates of capital-gains revenues over the 2003-2005 period.  Some have cited this CBO reestimate as evidence that capital-gains tax cuts, if not other tax cuts, pay for themselves.  More careful scrutiny shows, however, that this narrower claim is seriously flawed as well.

N. Gregory Mankiw, former chairman of President Bush’s Council of Economic Advisors and a Harvard economics professor, wrote in his well-known 1998 textbook that there is “no credible evidence” that “tax revenues … rise in the face of lower tax rates.”  He went on to compare an economist who says that tax cuts can pay for themselves to a “snake oil salesman trying to sell a miracle cure.”[13]

Commenting on President Bush’s claim that tax cuts pay for themselves, the Economist magazine recently wrote, “Even by the standards of political boosterism, this is extraordinary.  No serious economist believes Mr. Bush’s tax cuts will pay for themselves.”[14]

The President’s own Council of Economic Advisors concluded in its Economic Report of the President, 2003, that, “although the economy grows in response to tax reductions (because of the higher consumption in the short run and improved incentives in the long run) it is unlikely to grow so much that lost revenue is completely recovered by the higher level of economic activity.”[15]  The CEA chair at the time was conservative economist Glenn Hubbard.

Deficit-Financed Tax Cuts May Cost Even More than Official Estimates

A recent CBO study of the economic effects of tax cuts found that how tax cuts are financed significantly impacts how they affect the economy.  In the short run, deficit-financed tax cuts may help stimulate an economy in recession and thus temporarily improve growth (although the 2001 and 2003 tax cuts were poorly structured as stimulus).  But in the long run, the deficits that result from unpaid-for tax cuts constitute a drag on the economy because they lower national savings.[16]

For this reason, deficit-financed tax cuts may actually weaken long-run economic growth.  A study and literature review by Brookings Institution economists William Gale and Peter Orszag, for instance, concluded that the 2001 and 2003 tax cuts were “likely to reduce, not increase, national income in the long term” because of their effect in swelling the deficit.[17]  Studies by economists at the Congressional Budget Office and the Joint Committee on Taxation have found that, even in models that predict that deficit-financed tax cuts can have a positive economic impact over the ten-year budget window, their longer-run impact is negative.[18]

If deficit-financed tax cuts weaken economic growth, their long-run cost could be greater than conventional revenue estimates suggest, because they will reduce revenues not only directly (by lowering people’s tax bills) but also indirectly (by slowing the economy).  A recent CBO study of the economic effects of a hypothetical 10 percent across-the-board cut in income tax rates found that under certain assumptions, the increased deficits resulting from the tax cut would be enough of a drag on the economy that the tax cut actually would lose more revenue than if one assumed it had no effect on the economy.  In other words, deficit-financed tax cuts could be even more expensive than officially “scored,” rather than less expensive or costless.

[5] We consider here the revenue growth that the Administration projects through the end of fiscal year 2006.  The fiscal year will end on September 30, 2006, which will be 5 ½ years after the business cycle began in March 2001.  Hence, the equivalent period of earlier business cycles is the first 5 ½ years of those cycles.

[9] Growth rates are adjusted for inflation and population growth.

[18] Douglas Hamilton, “Dynamic Analysis of a 10 Percent Cut in Federal Income Tax Rates,” June 16, 2006, Joint Committee on Taxation, “Exploring Issues in the Development of Macroeconomic Models for Use in Tax Policy Analysis,” June 16, 2006.