The 2012 agriculture appropriations bill that the House approved on June 14 includes large cuts in the Special Supplemental Nutrition Program for Women, Infants, and Children (WIC) that would force the program to turn away more than 700,000 eligible low-income women and children next year. [1] One of the House Appropriations Committee’s justifications for this cut is its claim that over 40 percent of WIC expenditures go for program administration. The claim is flatly false: USDA data show that only 9 percent of federal WIC funds are spent on administrative costs. The Committee’s claim rests on errors in basic arithmetic and the mislabeling of core WIC services for nutrition education and breastfeeding support as though they were administrative costs, which they are not.

In coming up with the 40 percent figure, the Committee apparently misunderstood a finding in a USDA report that for every $1 in federal WIC funds spent for WIC foods in 2006, 41 cents in federal funds went for administrative costs plus WIC nutrition services. The Committee evidently used this statement to come up with its assertion (in the Committee Report accompanying the appropriations bill) that “administrative costs of operating WIC are well above 40 percent.”[2] But:

The proposed funding cuts in the House bill are unprecedented in WIC. Since 1997, Congress — on a bipartisan basis — has provided sufficient funding each year for WIC to serve all eligible low-income pregnant and breastfeeding women, infants, and young children at nutritional risk who apply.

USDA data demonstrate that only about 9 percent of federal WIC funds are spent on program administration, with about 19 percent being spent on nutrition education, breastfeeding support, and other services such as smoking cessation counseling and support. Together, these costs are referred to as “Nutrition Services and Administration” (NSA) funding. On average, they have represented 28 percent of federal WIC costs since 2001. [3]

An extensive body of research has documented WIC’s effectiveness in improving birth outcomes, reducing child anemia, and improving participants’ nutrition and health. WIC’s nutrition education, breastfeeding support, and other services are a part of the program’s success. These services are not administrative costs; rather, they help WIC achieve its goal of safeguarding the health of low-income women and children who are at nutritional risk. The portion of WIC funds devoted to these purposes has remained stable over time. 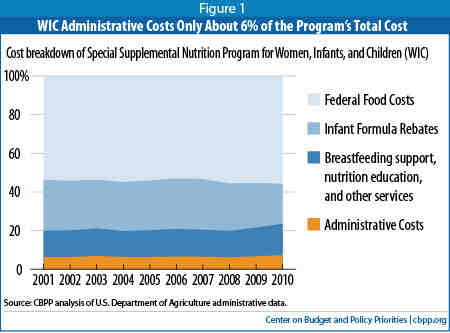 A centerpiece of WIC’s cost-containment efforts is a competitive bidding system for infant formula. Infant formula manufacturers provide $1.5 billion to $2 billion a year in rebates to WIC, which uses all of that money to reduce federal WIC food costs. As a result of these rebate savings, the cost of WIC to the federal government is much lower than the full retail value of WIC benefits to program participants. Figure 1 shows that if NSA expenditures are calculated as a share of the full cost of providing WIC benefits and services (rather than as a share of the federal cost net of rebates), they account for only about 20 percent of total costs (rather than 28 percent), with program administration falling to 6 percent of the total (rather than 9 percent).[5] The Government Accountability Office (GAO) has documented that NSA expenditures have represented about 20 percent of total costs since 1989 when the current NSA system was adopted. [6]

Moreover, the Committee failed to distinguish between funds spent on nutrition and related services and funds spent on administration. The USDA report itself notes that the nutrition services component of NSA costs “should be split out from administrative costs — but data are not available to do so.”[8] USDA has since made those data available and, as noted above, administrative costs represent about 9 percent of federal WIC expenditures. The rest of NSA expenditures are for services such as breastfeeding support, nutrition education, smoking cessation support, diet and health assessments, substance abuse screening and education, and health and social service referrals for needed care like immunizations.

The Committee Report contrasts its inflated claim regarding WIC expenditures to the model guidelines issued by the federal government’s Combined Federal Campaign (CFC), which “require a justification from any local charity that has administrative costs exceeding 25 percent.”[9] But charities that receive support from the CFC do not count services as administrative costs. The American Lung Association, for example, reports that 45 percent of its spending is on “public health education” — activities very similar to the types of nutrition services and education that WIC provides — but it properly categorizes these expenditures as “program services” rather than as administrative costs.[10] WIC, with administrative costs accounting for 9 percent of federal funding, compares quite favorably with CFC charities under a proper apples-to-apples comparison.

The House has sought to justify a cut in the WIC program that we estimate would force caseload reductions of at least 700,000 women and young children by arguing that WIC administrative costs represent more than 40 percent of WIC spending. But it has gotten its facts wrong. WIC administrative costs represent about 9 percent of federal WIC spending, and about 6 percent of total WIC costs. Another 19 percent of federal spending (and 14 percent of total WIC costs) are devoted to core services such as nutrition education, breastfeeding support, and health care referrals.

By law, WIC funding per participant for nutrition services and administration is allowed to rise no faster than inflation, a constraint that has been in place for more than 20 years. Because WIC has been remarkably successful over the last couple of decades in holding federal food cost increases well below inflation, WIC expenditures for food have risen more slowly than expenditures for administrative costs and nutrition services. As a result, costs for the latter have risen somewhat as a percentage of federal WIC expenditures. But this is a sign of program efficiency that other federal programs should emulate. It is not a justification for program cutbacks.

[3] The 29 percent figure in the USDA report noted above includes funds that states voluntarily contribute and federal spending on management information systems that are not included in NSA spending.

[4] See P.L. 101-147. The same legislation established the requirement for states to use competitive bidding to purchase the infant formula that their WIC programs dispense.

[5] In years in which food costs decline, such as fiscal year 2006 or fiscal year 2010, the share of overall spending devoted to NSA tends to be slightly higher, and vice versa.