The Administration is expected this week to issue estimates of enrollment to date in the Medicaid expansion and the new health insurance marketplaces, health reform’s major coverage expansions that take effect in 2014.  Examining the early experience with the Children’s Health Insurance Program (CHIP) provides a useful guide in evaluating these figures.

CHIP has been an undeniable success.  It provides comprehensive health insurance coverage to 8.1 million children in low-income working families.  Together with Medicaid, it has lowered the share of children without health insurance to a historic low of 8.9 percent in 2012, a 25 percent reduction since 1999.  This success, however, did not happen overnight.  It took several years to achieve substantial enrollment, driven by robust, collaborative efforts on the part of states, the federal government, and various stakeholders to establish and expand CHIP programs nationwide and find and enroll eligible children.

CHIP’s growth, from its inception in 1998 to the present, illustrates the life cycle of a major new health insurance program designed to address gaps in coverage for low- and moderate-income families.  It thus offers some insight into what we may reasonably expect for coverage gains over time under the Affordable Care Act (ACA) and lessons on how to fairly assess whether the ACA’s major coverage expansions, which first take effect in 2014, are successful in substantially reducing the ranks of the uninsured.

Similar to states’ experiences with CHIP, it will likely take several years — as well as sustained, cooperative efforts by states, the federal government, and stakeholders — to maximize enrollment of eligible uninsured adults and children in health reform’s coverage expansions.  An analysis by health economist Eugene Lewit that First Focus recently issued similarly concludes that CHIP’s early years show that it likely will take considerable time for health reform to achieve major coverage gains.[1]

As a result, any evaluation of the health reform law can’t be based solely on the first few months of enrollment numbers or even on all of 2014, just as CHIP couldn’t be judged based on its first year’s modest enrollment.  Rather, like with CHIP, accurately evaluating health reform’s coverage expansions will require several years of experience.

Policymakers enacted CHIP as part of the Balanced Budget Act of 1997, giving states the option to expand coverage to children in families with incomes that are modest but are too high for their children to qualify for existing Medicaid programs.

Although states could start operating their CHIP programs in fiscal year 1998, only eight states actually began enrolling low-income children in the first quarter of that fiscal year.  Moreover, only 29 states had their CHIP programs in operation by the end of fiscal year 1998, with only 665,000 children enrolled (see Appendix).  And, 56 percent of these children were enrolled in just three states — Florida, New York, and Pennsylvania — all of which already operated existing pre-CHIP, state-funded children’s health programs, from which they transferred children to CHIP in 1998.[2]

The slow CHIP enrollment was due to states facing multiple challenges in getting their CHIP programs up and running, including the need to enact state legislation to establish a CHIP program; to coordinate with the federal government to meet various statutory benefit, cost sharing and governance standards; to develop and commence operations of the new programs; and to undertake outreach to eligible families.

By March 2000, all 50 states and the District of Columbia had expanded health insurance coverage to more low-income children through CHIP.  And by the end of fiscal year 2000, enrollment had reached 3.3 million children, a five-fold increase over the first year’s enrollment.  From 2000 to 2003, CHIP enrollment then grew rapidly to 6 million low-income children as state CHIP programs matured and states implemented more effective outreach measures.  CHIP has grown steadily since and now provides health insurance coverage to 8.1 million children.  (See Figure 1.)

More than 87 percent of uninsured children eligible for CHIP or Medicaid were enrolled in 2011, the most recent year for which data are available.[3]  (Prior to CHIP, only 70 percent of the children eligible for Medicaid were enrolled.[4])  This participation rate compares favorably to the Medicaid participation rate among parents, which stood at 66 percent in 2011.

States succeeded in enrolling uninsured children in CHIP by innovating and adopting streamlined program administration and effective outreach strategies over a period of years.  “A cornerstone of the CHIP program, when launched, was its focus on enrollment,” Lewit notes in the First Focus analysis.[5]  For example, national campaigns such as the Robert Wood Johnson Foundation’s Covering Kids project collected information and worked for states’ adoption of best practices in administration, governance, and outreach.[6]  The result was a widespread, coordinated, and inclusive effort to reduce the number of uninsured children in low-income working families, by taking advantage of the new CHIP program to spur improved participation among families with eligible children, in both Medicaid and CHIP.

CHIP faced several administrative challenges in its early years.  States that chose to operate a combination CHIP expansion — a separate state program and an expansion of their Medicaid program in tandem — faced coordination challenges.  Early experience taught states several methods to overcome these challenges and increase participation among those eligible for CHIP coverage, including shortening and simplifying applications, determining eligibility for all available health insurance programs through a single agency, automating the sourcing of eligibility-related data available from existing databases, and easing the transition between programs.  In addition, the majority of states over time adopted procedures known to increase enrollment among eligible individuals, including eliminating asset tests, easing face-to-face interview requirements, and allowing applications to be completed online.[7]

Beyond effective enrollment procedures, states also had to make people aware of their CHIP programs.  CHIP offered health insurance coverage to children in modest-income families that earned too much to qualify for Medicaid but didn’t have access to affordable private coverage.  For many of these families, this would be the first opportunity to secure coverage for their children, as well as their first interaction with a publicly financed program (as also will be the case for many people who become newly eligible for Medicaid or subsidized coverage in the insurance marketplaces in 2014).  States and various organizations and agencies that work with low-income families responded to the need to connect eligible children to CHIP by engaging in efforts to promote CHIP’s availability and to reach out to eligible families.  Over time, the predominant strategy moved from mass media efforts through television and radio advertisements to more targeted campaigns conducted in schools and health clinics in low-income communities as well as to direct enrollment assistance.[8]

In contrast to the CHIP experience, many states now are pushing back against the Affordable Care Act, declining to expand Medicaid, and leaving it to the federal government to operate the marketplaces.  A handful of states have also refused to enforce the ACA’s insurance market reforms.  Such efforts may impede health reform’s progress in reducing the ranks of the uninsured.

The federal government played an instrumental role in helping states to increase their CHIP enrollment. 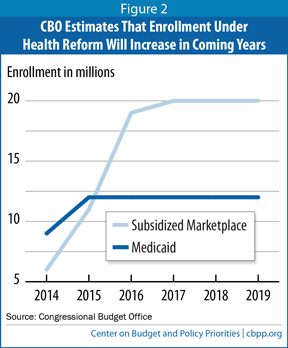 Beyond financing the substantial majority of states’ CHIP costs, the federal government partnered with states in developing new measures to boost CHIP enrollment and retention.  States increasingly have taken advantage of options like “express-lane eligibility” — which relies on eligibility determinations from other programs like SNAP (the Supplemental Nutrition Assistance Program, formerly known as food stamps) to enroll eligible low-income children in health coverage — and presumptive eligibility, under which states can immediately enroll low-income children who are likely to be eligible, so they have coverage while the regular application process is being completed.  These options, which are the product of partnerships between states and the federal government, have been shown to be effective in enrolling uninsured children in coverage.  The federal government has also provided financial incentives for states to institute practices that improve Medicaid and CHIP participation among eligible children.

Health Reform’s Coverage Gains Will Be Similarly Achieved Over Time

CBO has estimated that 25 million people who otherwise would be uninsured will eventually gain coverage as a result of health reform, by about 2016 or 2017.  (The coverage gains will be larger than this if most or all states ultimately adopt health reform’s Medicaid expansion for low-income non-elderly adults.)  These estimates are consistent with the CHIP experience, which shows that enrollment gains don’t happen overnight.

These coverage gains will be achieved only as the result of well-designed administrative and outreach efforts and robust collaboration among the states, the federal government, and stakeholders.  Some states continue, however, to take steps to weaken or impede health reform implementation and even to discourage some eligible individuals and families from enrolling.  If those efforts persist, health reform’s progress in significantly reducing the ranks of the uninsured may take longer than expected, even if issues relating to the website for the federally-administered marketplaces are fully and satisfactorily resolved.  Conversely, if most or all states commit over time to successfully implementing the Medicaid and marketplace expansions in the spirit that they did with CHIP, health reform’s projected coverage gains should be realized, and possibly exceeded.

[3] Genevieve Kenney, et.al., “Medicaid/CHIP Participation Rates Among Children,” The Urban Institute, September 2013, http://www.urban.org/uploadedpdf/412901-%20Medicaid-CHIP-Participation-Rates-Among-Children-An-Update.pdf.  The Medicaid/CHIP participation rate is defined as the number of children eligible for and enrolled in either Medicaid or CHIP divided by that same number plus the number of children who are eligible for Medicaid or CHIP but remain uninsured.

[6] For information about the Covering Kids campaign, please see http://www.coveringkidsandfamilies.org/.

[7] Martha Heberlein, et.al., “Getting into Gear for 2014:  Findings from a 50-State Survey of Eligibility, Enrollment, Renewal, and Cost-Sharing Policies in Medicaid and CHIP, 2012-2013,” the Georgetown Center for Children and Families, and the Kaiser Commission on Medicaid and the Uninsured, January 2013,  http://kaiserfamilyfoundation.files.wordpress.com/2013/05/8401.pdf.

[9] Congressional Budget Office, “Table 1: CBO’s May 2013 Estimate of the Effects of the Affordable Care Act on Health Insurance Coverage,” May 2013.