The Deficit Reduction Act (DRA), enacted in early 2006, reauthorized the Temporary Assistance for Needy Families (TANF) block grant.  The effect of the DRA is to significantly increase the proportion of TANF recipients that states would be required to engage in a specified set of work activities for a federally-prescribed number of hours each week.

The law also grants broad new regulatory authority to the Department of Health and Human Services — the federal agency that oversees the TANF block grant — in several areas.  In June 2006, HHS issued an Interim Final Rule — a regulation that was immediately effective.  The Interim Final Rule[1] includes new definitions of each of the allowable work activities, new requirements for how states must track and verify recipients’ hours of participation, and new policies for which families would and would not be included in the work participation rate calculations.  Taken together, most states as well as many outside analysts view the new regulations as restrictive.  The definitions in the regulations significantly narrow the kinds of employment-related programs for which states can get credit in the work participation rate calculation and include stringent new requirements on states that mean that every hour of participation must be verified.[2]

Last August, HHS received more than 500 sets of comments from states, organizations, and members of the public about the regulations.  The comments from state human service agencies and organizations representing states (such as the National Governors Association and the American Public Human Services Association) were remarkably consistent in their criticisms of the Interim Final Rule.

While HHS has the authority to make major changes in the regulations, there has been little indication from the agency that it is inclined to do so.[3]  Congress, however, could make legislative changes that could address some of the most serious concerns that states and others have raised about the Interim Final Rule as well as the underlying statute itself.  In fact, on June 26, NGA released a letter to the chairmen and ranking members of the Senate Finance Committee and the House Ways and Means Committee that urges Congress to “enact legislation that will help us better administer the Temporary Assistance for Needy Families (TANF) program and restore flexibility to this successful program.”[4] The letter summarizes the states’ concerns this way, “While we believe that some of the requirements found in both the DRA and the interim final rules help establish a level playing field among the states and regions; others are unduly burdensome, and we ask for your help in restoring some common sense aspects of this critical program.”[5]

The areas of serious concern that states have highlighted in either their comments on the regulations or the NGA letter (or both) include the following:

In addition to these issues, Congress should consider additional changes that are unrelated to the new regulations but reflect legislative proposals that had significant support during the TANF reauthorization debate but were not included in the final legislation, in most cases because they were legislative changes that are not allowed in a “reconciliation” bill.  (The DRA was part of larger budget reconciliation bill that has special rules about the kinds of provisions that can and cannot be included within it.)  This includes eliminating the separate work participation rate that applies to two-parent families, an issue raised in the NGA letter.

[2] States are permitted to engage recipients in activities that do not count toward the federal participation requirements, but because the overall participation rates are difficult for states to meet, doing so increases the risk that a state will fail to meet federal requirements and will be subject to a fiscal penalty.

[3] See the Testimony of Sidonie Squier, Director of the Office of Family Assistance, Administration for Children and Families, Department of Health and Human Services, http://waysandmeans.house.gov/hearings.asp?formmode=view&id=5582, March 6, 2007. 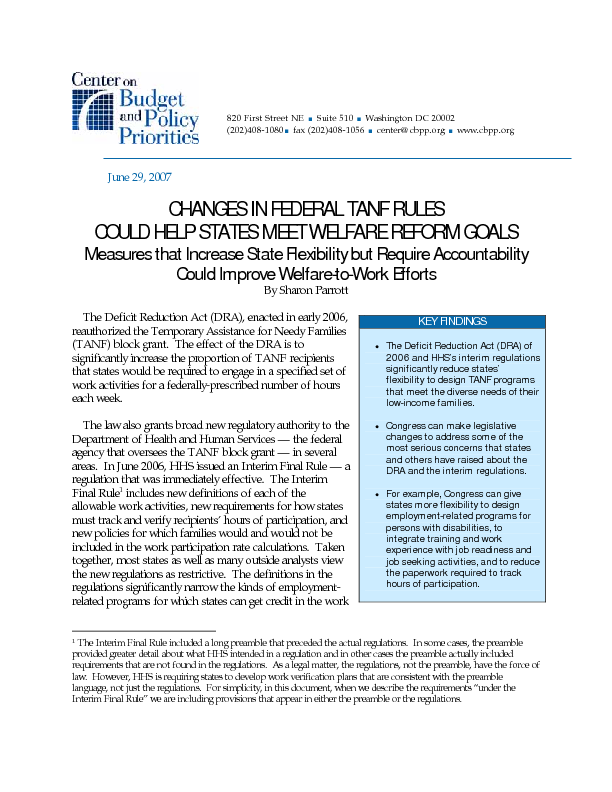