Congress completed action on the regular appropriations bills for fiscal year 2006 on December 21, 2005, after imposing a one-percent across-the-board cut on all funding except that for veterans or emergencies.  The one-percent cut is in addition to the specific reductions or increases otherwise provided by the 2006 bills.  In June 2006, Congress enacted an emergency supplemental appropriations bill for 2006.

During debates on the regular appropriations bills, many Members of Congress appeared to labor under the impression that funding for domestic discretionary programs had exploded in recent years.  This impression seems to stem, at least in part, from releases issued by conservative groups charging that the federal government has been on a “spending spree” and that domestic programs, rather than defense and anti-terrorism spending, have been the main culprit.[1]  These releases were seriously misleading.  As a recent Center analysis explains,[2] funding for domestic appropriations actually followed a sustainable path between 2001 and 2005 — it remained stable, rather than increasing, as a share of the economy.  By contrast, funding for security programs — defense, international affairs, and homeland security — grew rapidly.

Then, in action on the fiscal year 2006 appropriations bills, Congress restrained funding for domestic discretionary programs to a greater extent than in any year since fiscal 1996, the first budget produced by the “Contract with America” Congress.  As a result, as Tables 1 and 2 and the appendix tables show:

As noted, funding for security programs has followed a different path and has increased very substantially.

These real per capita growth rate figures show the degree to which funding for discretionary programs has kept pace with, or grown faster than, inflation and population growth.  Real per capita growth rates do not, however, tell us whether government programs are growing more rapidly than the economy as a whole and thus whether they are consuming a steadily increasing share of the national income.  To determine that, we must examine changes in the federal budget as a share of the economy.  When the budget absorbs a rapidly increasing share of the economy, it is growing at an unsustainable rate.  In contrast, programs that grow no faster than the economy can continue at that pace forever without exerting increased pressure on the budget. 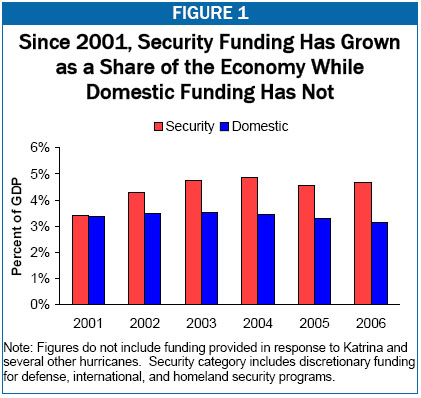 The graph on this page and the tables in the Appendix show overall funding levels for both security programs and domestic discretionary programs, measured as a percentage of GDP, for each year from 2001.  The Appendix tables also show overall funding levels for security and domestic discretionary programs in nominal terms, in inflation-adjusted terms, and in per-person inflation-adjusted terms (i.e., in real per-capita terms).

[3] Funding data from 2001 through 2004 are from the Office of Management and Budget, Historical Tables, February 2005.  Funding data for 2005 and 2006 were supplied by CBO.  Finally, we adjust the OMB and CBO funding data to account for anomalies associated with transportation trust funds, advance appropriations, low-income housing, and the timing of the change in administrations.  The reasons for these adjustments to the funding data are explained in the appendix to The Omnibus Appropriations Act: Are Appropriation For Domestic Programs Out of Control? CBPP, February 1, 2004, available at https://www.cbpp.org/sites/default/files/atoms/files/12-16-03bud.pdf.