A range of measures suggest that many black and Latino families face hardship of some type.  Between one-fourth and one-third of families with children headed by blacks or by Latino citizens  experience overcrowded living conditions, difficulties paying for food, or lack of needed medical care.  Hardship rates rise further — to as many as half of black families with children — when additional types of hardship are considered.

These findings come from the Census Bureau’s Survey of Income and Program Participation (SIPP), which will be terminated this year unless Congress provides additional funding in the fiscal year 2007 appropriations bill that provides funding for the Bureau.

Analysis of data from the SIPP survey — the most wide-ranging source of government data on family hardships, income and resources, and living conditions— shows the following.  These hardship data were collected in 2003 and are the most recent available from the SIPP survey. [1]

Hardship rates are still higher among Latino families headed by a non-citizen.  Nearly half (47 percent) of families with children headed by a Latino non-citizen experienced one or more of these three hardships.[4] 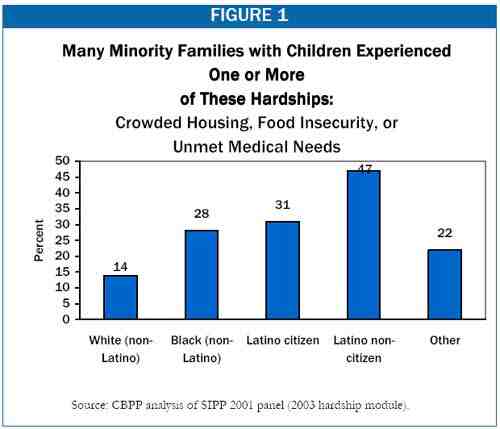 Rates of hardship rise even higher when additional types of hardship are considered.  A 2004 report by the U.S. Department of Health and Human Services explored a wide range of hardship indicators including 14 distinct measures related to “availability of basic needs and food security” and “housing safety and overcrowding.” [5]   Using this list of measures, we find that 49 percent of black families with children and 43 percent of Latino citizen families with children experienced one or more of these 14 circumstances in 2003, compared with 31 percent of non-Latino white families.

Not surprisingly, rates of hardship are considerably higher among families living in poverty.[6]

The high rates of poverty among minority families with children contribute to their risk of hardship.  Poverty rates are two to four times higher among black families (29 percent) and Latino citizen families (17 percent) than among non-Latino white families (8 percent) in the SIPP data.

High reliance on work, however, does not protect poor families from hardship.  The chances of experiencing crowded housing, food insecurity, or unmet medical needs were virtually identical among poor able-bodied families with children, regardless of whether they received most of their income from work (48 percent) or not (47 percent).

The different racial and ethnic groups face somewhat different types of hardship, with crowded housing being especially widespread among Latinos.

Combining citizen and non-citizen families together, the SIPP data indicate that 38 percent of Latino families overall face one of the three hardships examined here:  crowded housing, food insecurity, or unmet medical needs.  This is significantly more than among non-Latino families, whether white (14 percent) or black (28 percent).

On the other hand, other groups fare worse than Latinos on certain other hardship measures.  For example, non-Latino blacks have slightly higher rates of a particularly severe category of food insecurity, termed food insecurity with hunger (see Appendix Table).[7]

Changes Since the SIPP Survey

The government has not published comparable data showing families' cumulative experience of a range of hardships since the SIPP data examined here.  It has, however, published updated figures for some individual hardship measures.  These data differ slightly from the data used in this analysis in terms of the concepts and time periods measured.

The newer data show that the proportion of all Latino families with children that experienced food insecurity has declined since 2003, a change that may in part reflect the restoration of food stamp benefits to some legal immigrants under the 2002 Farm Bill.  The proportion of Latino families with children experiencing food insecurity in the previous 12 months fell from 28.1 percent in 2003 to 21.6 percent in 2005, according to a recent Agriculture Department report

In other respects, the data show little change.  The proportion of all Latino families with children not receiving needed medical care, or receiving delayed care, due to cost in the past year increased slightly,from 13 percent in 2002/2003  (the time period of the SIPP medical hardship questions) to 14 percent in 2005, according to data from the National Health Interview Survey.

The proportion of all Latino households living in overcrowded housing did not change significantly from 2003 to 2005, according to data from the American Housing Survey.  For blacks, none of these three measures — food insecurity, delayed or no medical care, or crowded housing — changed significantly through 2005.

[2] Hardships in the Census data are determined for the household.  The data do not indicate which members of the family (or other household members who may be living with the family) experienced the hardship.

[3] About three in five (3.7 million) Latino families are headed by a U.S. citizen.  They include 2.8 million families headed by a U.S.-born citizen and 0.9 million headed by a naturalized citizen.  For both types of citizen families, hardship patterns are similar.  Among households with children headed by either a native-born or naturalized Latino citizen, 31 percent experienced one or more of the three hardships examined in this analysis.

[5] The 14 indicators include: did not  pay rent or mortgage; did not pay gas, oil, or electricity bill; telephone disconnected for failure to pay; needed to see doctor or go to hospital but did not; needed to see dentist but did not; food insecure; problems with pests; leaking roof or ceiling; broken windows; exposed wires, nonworking plumbing; holes in walls or ceiling; holes in floor; overcrowding.  U.S. Department of Health and Human Services (2004), Measures of Material Hardship: Final Report, available at http://aspe.hhs.gov/hsp/material-hardship04.