Since President Obama and Congress enacted the “fiscal cliff” budget deal, congressional Republican leaders have vowed not to raise a dollar more in taxes for deficit reduction.  All further deficit reduction, they say, must come from budget cuts, primarily from entitlement programs.  That, however, would spare the broad category of tax deductions, exclusions, credits, and other tax preferences known collectively as “tax expenditures” — which disproportionately benefit well-to-do Americans and which Alan Greenspan has termed as “tax entitlements” — while putting the onus entirely on spending programs, which disproportionately benefit middle- and lower-income Americans.

Tax expenditures are costly (see Figure 1), and many of them are wasteful.  Because tax expenditures disproportionately benefit those at the top while spending programs primarily benefit those in the middle or at the bottom, a strategy that protects the former entitlements while cutting the latter would be highly regressive.

A Selective Approach to “Entitlements”

Senate Minority Leader Mitch McConnell proclaimed in an op-ed last week, “I have news for [President Obama]:  the moment that he and virtually every other elected Democrat in Washington signed off on the terms of the current arrangement, it was the last word on taxes.  That debate is over.”[1]   Similarly, House Speaker John Boehner’s staff declared, “As far as we’re concerned, the tax issue is off the table.”[2]   This, despite the fact that Boehner proposed several hundred billion dollars of additional revenues during his negotiations with President Obama only a few weeks ago.

Republicans say that from here on, we should do only spending cuts, focusing on entitlement programs.  But their approach to entitlements is highly selective — they seek to cut the entitlement programs on the spending side of the budget, whose benefits go overwhelmingly to middle-class and poor families.  But they want no deficit reduction to come from the most wasteful and inefficient of entitlements — those embedded in the tax code.

Tax Expenditures Are Costly, and Many Are Wasteful 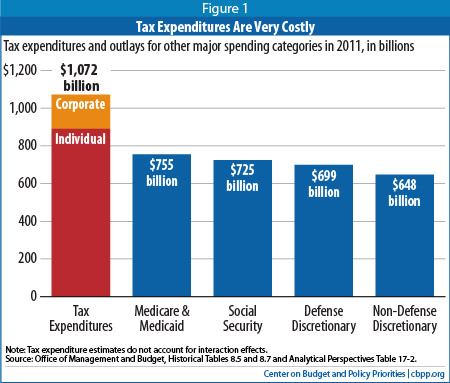 Tax expenditures cost about $1.1 trillion a year, far more than Social Security or than Medicare and Medicaid combined and nearly two-thirds more than the total cost of all non-defense discretionary programs (see Figure 1).  Many are wasteful; Harvard economist Martin Feldstein, former chair of President Reagan’s Council of Economic Advisers, has said that “cutting tax expenditures is really the best way to reduce government spending.”[4]

As a result, cutting only spending entitlements while shielding tax entitlements would have a highly regressive impact.  So would undertaking “tax reform” that curbs some tax expenditures but uses all of the savings to reduce tax rates, especially for high-income people, with none of the proceeds going for deficit reduction.[6]   Such a posture starkly violates a core principle of the Bowles-Simpson deficit-reduction plan — that deficit reduction must protect the vulnerable and avoid increasing poverty or further widening inequality.  It also contrasts with the recent budget negotiations, in which Speaker Boehner assented to using some savings from curbing tax expenditures for deficit reduction.

To grasp the regressive policy choices that such a course of action entails, consider child care subsidies.  The federal government provides subsidies for child care costs through both the spending and tax sides of the budget.  On the spending side, it funds mandatory and discretionary programs that help low- and moderate-income working parents afford child care.  On the tax side, it subsidizes middle- and upper-income families’ child care costs through the Dependent Care Tax Credit.

These spending and tax subsidies differ, however, in a key respect.  Child care assistance for low-income families that’s provided through the spending side of the budget is capped.  As a result, only one out of every six low-income working families that meet the federal eligibility criteria receives any of it.[7]  In contrast, the tax subsidy is open-ended, so all families that qualify for it — no matter how high their income — get it.  It is the pure entitlement here.

To insist that all further deficit reduction come from the spending side of the budget is effectively to suggest that Congress cut programs like child care assistance for low-income working families — even though many of those parents can’t afford to work without it — while ruling out getting any deficit savings from changes in tax expenditures like child care subsidies for affluent parents who don’t need them to defray child care costs.

This illustrates the illogic — and the injustice — inherent in the McConnell-Boehner position that programs on the spending side of the budget should be cut, but spending delivered via the tax code must be off limits for deficit reduction.

[6] Robert Greenstein, “Why Revenue-Neutral Tax Reform Would Be a Big Mistake,” Off the Charts blog, January 8, 2013, http://www.offthechartsblog.org/why-revenue-neutral-tax-reform-would-be-a-big-mistake/.