A Frigid Forecast for the Sunshine State: Proposed Revenue Cap as Damaging as Colorado’s TABOR

Recently, the Speaker and other leaders of Florida’s House of Representatives unveiled details of their comprehensive property tax relief proposal. One component is a constitutional limit on state and local revenue growth.[1] This proposal deserves a great deal of attention because it is almost a carbon copy of Colorado’s Taxpayer Bill of Rights (TABOR):

The limit can therefore be expected to cause a deterioration in public services in Florida similar to that produced by TABOR in Colorado.

During the twelve years since TABOR was adopted in Colorado, K-12 funding declined from 35Th to 49th in the nation, and higher education funding dropped by 31 percent.  In addition, the share of low-income children lacking health insurance doubled at a time that it was dropping nationally, and Colorado fell to near last in the nation in providing on-time full vaccinations to the state’s children.

These problems led business leaders and Chambers of Commerce across the state to push for the suspension of TABOR’s population-growth-plus-inflation formula for five years in order to allow the state to restore a portion of its fundamental public services.  In November 2005, Colorado voters approved this suspension. To date, Colorado is the only state to have adopted a TABOR, as well as the only state to have voted to suspend it.

Florida already ranks near the bottom among the states on a number of key public services and can’t afford any further declines in the public services upon which Floridians depend, such as health care, education and public safety. But as the Colorado experience has shown, this is likely to happen if the proposed revenue limit is adopted.

Click here to read the full-text PDF of this report (11pp.) 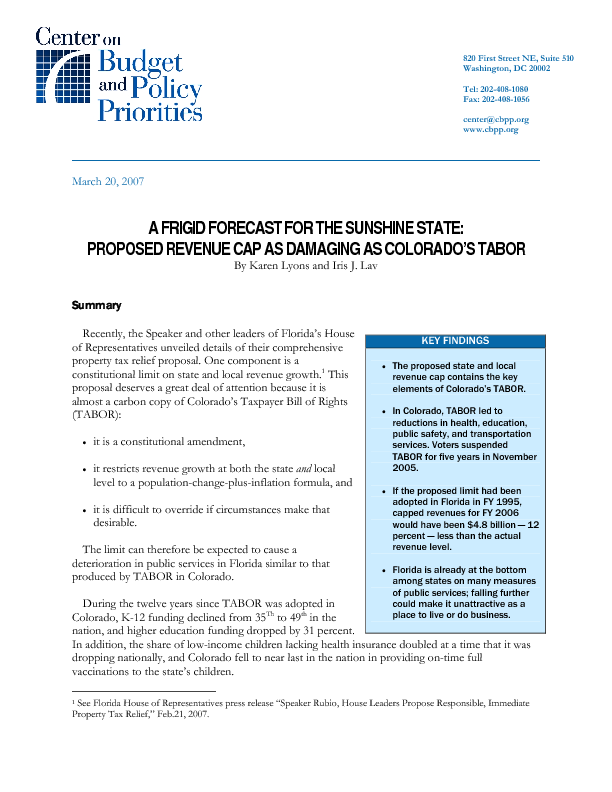