A $7.25 Minimum Wage Would Be a Useful Step in Helping Working Families Escape Poverty

In the early 1990s there was basic agreement that parents working full time should not have to raise their children in poverty.  While liberals and conservatives sometimes differed on the means to reach this goal, they agreed with the core principle.

The yardstick used to measure achievement of this goal was whether a minimum-wage earner in a family of four earned enough (after subtraction of payroll taxes), together with the Earned Income Tax Credit (EITC)

and food stamps, to have an income at or above the poverty line.  (It should be noted that this is a very low floor.  In 2006, the federal poverty line for a family of four was about $20,000, well short of what most Americans would consider a decent standard of living.)

However, ten years of inflation have eroded the minimum wage to its lowest inflation-adjusted level in more than 50 years.  As a result, in 2006 a family of four with one minimum-wage earner had a total income (including food stamps and the EITC) of $18,950, some $1,550 below the poverty line.

Raising the minimum wage from its current level of $5.15 an hour to $7.25 in 2009, as has been proposed, would ensure once more that a family of four with a parent working full time at the minimum wage does not have to raise its children in poverty (see Figure 1).

It is important to note that if, as is expected, the minimum wage legislation does not index the wage for inflation after 2009, inflation will once again begin to erode the wage’s value.  If no other changes are made, the family in this example will fall back below the poverty line by 2015.

Many Minimum-Wage Workers Will Remain Poor

While an increase in the minimum wage would raise the earnings of many workers and lift some families above the poverty line, some minimum-wage workers would remain poor.  This includes many workers who experience periods of joblessness during the year.  Low-wage workers often are ineligible for unemployment insurance when they lose their jobs; even when they are eligible, they often receive low benefits. 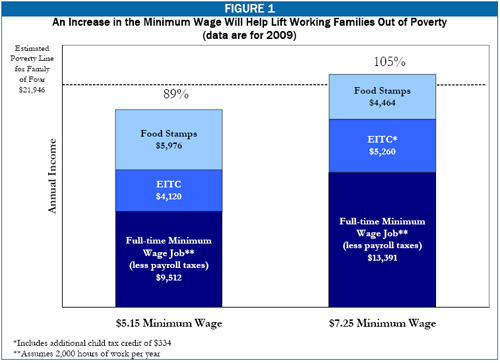 Participation rates are higher in the EITC than in the Food Stamp Program, but some families that are eligible for EITC benefits do not file for them.

Opponents of increasing the minimum wage often portray minimum-wage workers as middle-class teenagers.  Some fit that description, but many others do not.  Recent Census data show that among those workers likely to get a pay increase as a direct result of a minimum-wage increase:

One reason many minimum-wage workers have low incomes is that they are not employed full-time throughout the year.  Low-wage jobs often have high turnover rates, and low-wage workers sometimes have to leave their jobs to care for an ill family member or when child care arrangements fall through.  Low-income working parents typically work close to full-time when they are employed, but have periods of joblessness over the course of the year.

a Center on Budget and Policy Priorities calculations of the March 2006 Current Population Survey.  The 2006 data do not include information on food stamp receipt or refundable tax credits and, thus, only cash income can be analyzed.  Data for 2005 does include information on these other forms of income; analysis of the 2005 data produced roughly the same results as are shown here.

Evidence of the difficulties near-poor households have in making ends meet is found in the  U.S. Department of Agriculture’s “food insecurity” data.  In 2005, according to USDA, about one in seven households with incomes between 100 percent and 185 percent of the poverty line were uncertain of having, or unable to acquire, enough food because they had insufficient money and other resources for food .

Building on a Higher Minimum Wage

Raising the minimum wage would be an important first step and a useful complement to public policies like the EITC, food stamps, and child care subsidies, which provide additional benefits and supports for low-income working families.  A broader agenda is needed, however, to raise the prospects of low-wage workers and their families more significantly.  Such an agenda would need to include additional income supports, help in obtaining the health care, child care, and housing that these families need but often cannot afford, and new opportunities to attend college or upgrade their skills so they can secure higher paying, more stable jobs.

When this definition was developed, the federal Child Tax Credit did not exist.  This credit is included with the EITC in this analysis.

Under the proposal, the minimum wage increase would be phased in over the next two years, rising to $5.85 sixty days after enactment; $6.55 twelve months after that; and $7.25 in another twelve months.

Food stamp benefits are based on a household’s income — as income rises and families can afford to purchase more food, benefits fall.  For every dollar of additional earnings, households lose between 24 and 36 cents in food stamp benefits.

Raising the minimum wage would mean that a full-time, minimum-wage worker would qualify for the refundable Child Tax Credit.  In 2007, such workers do not qualify because the credit is only refundable for those with earnings above $11,750.

CBPP calculations based on the March 2006 Current Population Survey.

See Out of Reach, National Low Income Housing Coalition, 2005, http://www.nlihc.org/oor/oor2005/index.cfm.  NLIH’s calculation of the national average cost of a two-bedroom apartment is based on HUD’s Fair Market Rent estimates.

Note that under these standards, refundable tax credits and food stamps are not included as income or when determining housing affordability.

Donna Cohen Ross and Laura Cox, "In a Time of Growing Need: State Choices Influence Health Coverage Access for Children and Families," Kaiser Commission on Medicaid and the Uninsured, Oct. 2005.