PDF of this statement (3pp.)
Image

Today’s jobs report shows a labor market that is still not generating enough jobs to lower the unemployment rate. Unless job creation picks up dramatically, unemployment will likely remain elevated for some time to come, as it did in the previous two recessions, though at much higher rates this time (see chart).

Creating fewer than 100,000-more private sector jobs a month, the labor market is barely treading water. The economy would have to create over 300,000 jobs a month for two years just to restore employment to where it was at the start of the recession, and more than that to restore full employment with a growing population.

Congressional opponents of stimulus measures that could create more jobs have held sway for most of this year. Yesterday was an exception, however, as the Senate approved measures giving states $26 billion to preserve jobs and fill part of their gaping budget shortfalls. And last month, the Senate finally overcame opposition to continuing to provide additional weeks of unemployment insurance (UI) benefits to unemployed workers—though Congress only extended the benefits through November, failed to renew subsidized COBRA health insurance benefits, and eliminated the extra $25 a week of UI benefits provided in last year’s Recovery Act

The House should quickly approve the state fiscal relief measures that the Senate passed yesterday. They are temporary, well-targeted, and effective job-creating stimulus measures, and they are offset by deficit-cutting measures that will take effect in 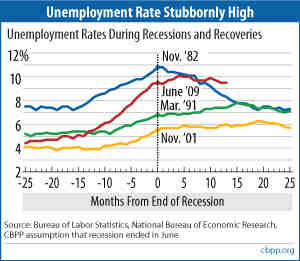 several years (when the economy is expected to be stronger and can absorb such fiscal contraction). Next, Congress should apply this logic of combining short-term stimulus with longer-term deficit reduction to President Bush’s upper-income tax cuts: let them expire as scheduled at the end of this year to achieve long-term deficit reduction, but use the savings in the first year or two to provide additional job-creating stimulus while the economy is still weak – such as rewarding businesses large and small that create jobs with a tax credit,[1] continuing to provide extra weeks of unemployment benefits beyond November, and extending the TANF Emergency Fund that states and localities are now using to help create some 240,000 subsidized jobs in the private and public sectors, but which is scheduled to expire September 30.

About the July Jobs Report

The labor market remains in a deep slump with weak — but at least positive — underlying private sector job growth, many more people looking for work than there are new jobs being created, and a disturbingly high unemployment rate.