Statement by Chad Stone, Chief Economist, on the May Employment Report

More than six years after the Great Recession and the worst jobs slump since the 1930s began, today’s jobs report shows that payroll employment has finally topped its level at the start of the recession (see chart).  Still, with essentially no net job growth since December 2007 but a growing working-age population, many more people today want to work but don’t have a job. 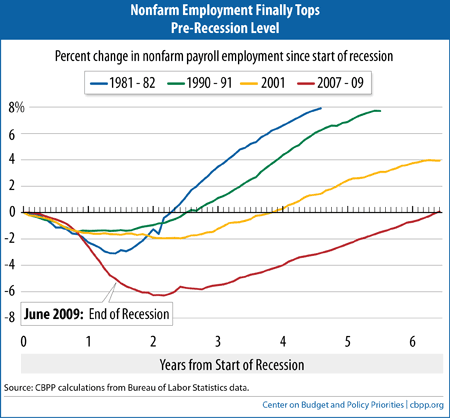 Not all of these people show up in the official unemployment rate.  That’s because some of them who want a job aren’t actively looking for one, for any one of several reasons.  Some are discouraged by their prospects of finding a job.  Others have decided that, until job prospects improve, they could better spend their time staying home to care for young children rather than pay for child care, doing home repairs rather than pay someone to do them, or taking courses at the local community college to improve their future earnings prospects.  These people are not classified as unemployed because they are not actively looking for work and therefore not in the labor force.

Stronger demand growth and faster job creation also may be the last best hope for the long-term unemployed (those looking for work for six months or longer), who research suggests don’t look much different from other unemployed workers — except that they lost their job at a particularly bad time for finding a new one and then faced discrimination by prospective employers for having been unemployed so long.  Policymakers abandoned the long-term unemployed, first when they let emergency federal unemployment insurance (UI) expire at the end of last year and then when the House refused to even consider the bipartisan Senate compromise that would have extended those benefits through the end of last month.

Emergency UI not only provides needed financial support to jobless workers and their families, but also keeps long-term unemployed workers in the labor force looking for work rather than dropping out.  On a bang-for-the-buck basis, it’s also one of the best ways to stimulate demand and strengthen the job market.  That policymakers let it lapse was a tragedy.

Employers reported solid payroll growth in May.  In the separate household survey, the labor force grew moderately and the unemployment rate, labor force participation rate, and percentage of the population with a job were essentially unchanged.

The Center on Budget and Policy Priorities is a nonprofit, nonpartisan research organization and policy institute that conducts research and analysis on a range of government policies and programs.  It is supported primarily by foundation grants.