With job losses mounting and the recession deepening, there is no time to waste enacting the economic recovery package now before the Congress.   That package will provide needed benefits to unemployed workers, and it would help stem the tide of job losses and moderate the severity of the downturn.

The recession that began in December 2007 has entered its 14th month, and the economy continues to hemorrhage jobs.  The Congressional Budget Office estimates that without a recovery package the unemployment rate will reach 9.0 percent in the fourth quarter of this year and will be down only to 7.5 percent two years later.  The recovery package cannot end the recession immediately but it can limit the increase in unemployment and boost the number of jobs substantially above what it otherwise would be over the next several years.  Meanwhile, labor market conditions are grim. 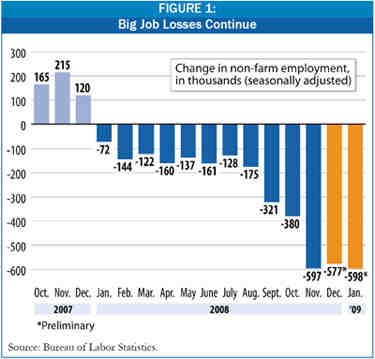 Contrary to what some critics say, the economic recovery package working its way through Congress by and large is focused on the task at hand, which is to provide a needed boost to an economy that is in the midst of a long and deep recession.  (See: Attacks on Congressional Recovery Package Don't Withstand Scrutiny)  Such a package is necessary to put a brake on job losses and lay the groundwork for a strong recovery.