Today’s jobs report shows a labor market that strengthened significantly in 2014, but one that still bears scars from the Great Recession and subsequent federal budget cuts and other austerity policies that perpetuated a severe jobs slump even as the economy and business profits began to recover.

On the positive side, in 2014, the unemployment rate fell from 6.7 percent in December 2013 to 5.6 percent in December 2014, and employers added an average of 246,000 jobs a month (see chart).  That’s the largest 12-month gain in the recovery.  At the same time, too many people who want a job haven’t found one, especially among the long-term unemployed.  Although unemployment fell sharply in December, for example, the labor force actually shrank as more people dropped out than found jobs. 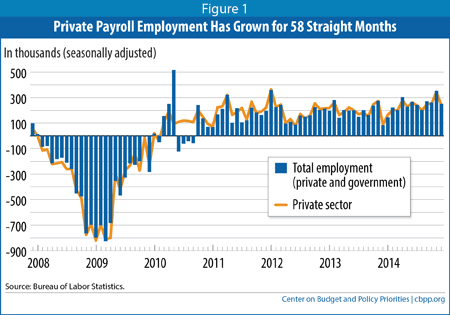 Private-sector employers have added jobs for 58 straight months, but for much of that period government job losses held down overall job creation.   Last year, the huge job losses from the recession were finally erased and government employment also began to grow modestly.  Restoring payroll employment to its pre-recession level was a milestone on the way to a full jobs recovery, but population growth over the past several years means the potential labor force is now larger.  To restore full employment, job creation must continue to outpace population growth.

The potential labor force includes not only people who are actively looking for work (the unemployed) but also people who want to work but are not actively looking because they think jobs are hard to find.  The number of such people — who are not counted in the labor force — rose sharply in the recession and subsequent jobs slump, as did the number of people who want to work full time but can only find part-time jobs.  Similarly, the number of long-term unemployed (jobless for 27 weeks or longer), who face greater problems finding work than those who have been unemployed for a shorter period — in part because of employer discrimination against the long-term unemployed — rose sharply.

All of these indicators of labor market “slack” (people who are not working but want to be or people who want to work full time but can only find part-time jobs) fell in 2014.  Nevertheless, they remain abnormally high.  In particular, the share of the population with a job remains near its recession low.   That’s why we need continued strong job creation to restore normal labor market conditions.

Policymakers played an important role in preventing the economy from falling into an even deeper hole in late 2008 and early 2009 when they enacted financial stabilization measures, including TARP, and fiscal stimulus measures, especially the American Recovery and Reinvestment Act.  Subsequently, however, their misplaced emphasis on immediate deficit-reduction rather than additional temporary stimulus slowed the recovery.  The new Congress should recognize that the job market improvements in 2014 occurred in spite of austerity, not because of it.

About the December Jobs Report

Employers reported strong payroll job growth in December.  In the separate household survey, the unemployment rate fell to 5.6 percent, but much of the drop in unemployment reflected lower labor force participation rather than an increase in the share of the population with a job.