PDF of this statement (1pp.)

Today’s extremely disappointing employment report shows that the economy remains mired in a slump and still waiting for something to jump start a sustainable recovery. Consumer spending supported by the stimulus payments that Congress enacted earlier this year helped keep the economy growing in the second quarter, but the headwinds from still-high energy prices, a weak housing market, tight credit markets, and continuing financial market uncertainty will make it difficult to sustain economic growth as the effects of the first round of stimulus wear off.

August was the eighth straight month of job declines, with employers shedding a cumulative 605,000 jobs so far this year. The official unemployment rate jumped to 6.1 percent in August, and other indicators show even greater labor market weakness. The percentage of the population with a job (62.1 percent) is at its lowest level since the fall of 2003 – near the bottom of the last jobs slump. The Labor Department’s most comprehensive alternative unemployment rate measure — which includes people who want to work but are discouraged from looking and people working part time because they can’t find full-time jobs — stood at 10.7 percent in August, its highest level since June 1994. In addition, 1 in every 5 of the 9.4 million unemployed has not been able to find a job despite looking for 27 weeks or more. 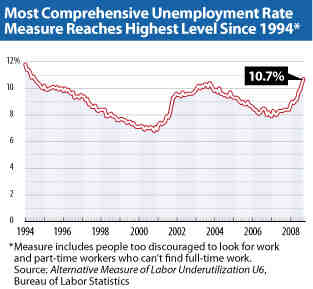 Revised figures show that the economy expanded at a 3.3 percent rate in the second quarter, but all signs suggest that growth will slow markedly in the coming months. The Federal Reserve’s “Beige Book,” which compiles reports from regional Federal Reserve Banks, found widespread weakness in August. As today’s jobs report shows, the labor market is particularly weak. Claims for unemployment insurance jumped unexpectedly this week to 444,000 and the number of people receiving unemployment benefits is the highest since November 2003.

The weak growth that is forecast for the rest of 2008 and into 2009 suggests that a well-targeted second round of fiscal stimulus would benefit the economy, as well as state governments and those individuals who are most feeling the effects of the weak economy. To be most effective, such a package should provide assistance to those who are experiencing the greatest hardship and should go where it will be spent most quickly and thus have the largest stimulus impact.

Specifically, a temporary increase in aid to state governments to help them avoid budget cuts and tax increases and a temporary increase in food stamp benefits would have a high fiscal stimulus bang-for-the-buck because they would be spent quickly. An increase in low-income home energy assistance (LIHEAP) would be well-timed to keep low-income households from cutting back on other purchases when facing high energy bills. Policymakers have enacted an additional 13 weeks of unemployment insurance (UI) benefits for workers exhausting their regular benefits but, given pronounced weakness in the labor market, additional assistance to unemployed workers would help unemployed workers and be very effective stimulus as well. As with the first stimulus package, the three T’s – timely, targeted, and temporary – should be the guiding principles in designing an effective package.