Skip to main content
CBPP Statement: May 8, 2009 - For Immediate Release

Today’s jobs report brings more sobering news about the depth and duration of the recession.  Even if the economy hits bottom soon and begins growing again, it will take time to reverse the severe job losses and sharp increase in unemployment that have already occurred. 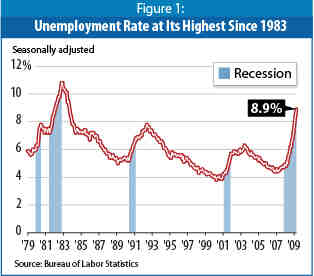 The official unemployment rate hit 8.9 percent in April, the highest it has been since 1983 (see chart).  But that figure does not portray the full difficulties that job seekers face.  The Labor Department’s most comprehensive alternative unemployment rate measure — which includes people who want to work but are discouraged from looking and people working part time because they can’t find full-time jobs — rose to 15.8 percent in April, an increase of 7.1 percentage points since the recession began and the highest level on record in data that go back to 1994.

These job market realities highlight the important role that the strengthened unemployment insurance (UI) measures in this year’s economic recovery law play in cushioning the impact of substantial and widespread unemployment on workers and their families and on the economy as a whole.  Along with temporarily providing additional weeks of UI and higher benefit levels to laid-off workers, that law provides federal funds to reward states that reform their UI eligibility standards to bring more hardworking families into their UI program.  Twelve states have already taken such measures and at least 20 more are expected to do so this year, the National Employment Law Project reports.

The coming months will be crucial for evaluating whether the substantial economic recovery measures already in place are working as expected to help turn the economy around.  Even if a turnaround is imminent, high unemployment will persist for some time into the recovery.  That’s why it is important that as many states as possible take advantage of the incentive funding to modernize their UI programs.  In addition, the temporary UI measures in the recovery law expire at the end of this year.  Policymakers should be prepared for the need to extend them into 2010.

About the Jobs Report

The recession that began in December 2007 has entered its 17th month, making it longer than any other post-World War II recession.  Unemployed workers face a harsh environment in which to find a new job.

With jobs so hard to find, policymakers were wise to make additional weeks of UI benefits available to the long-term unemployed.  Under the Emergency Unemployment Compensation (EUC) provisions of the economic recovery law, all states are eligible for an additional 20 weeks of federally funded benefits and states with unemployment rates above 6 percent are eligible for an additional 33 weeks of benefits.  Currently 43 states qualify for the 33 weeks.  States with especially high unemployment rates can also qualify for additional weeks of benefits under the Extended Benefits (EB) provisions of the regular UI program, and the recovery law temporarily made those benefits fully federally funded as well (normally states pay half).