A President’s budget reflects his vision for America.  From that perspective, President Trump’s vision is stark, with the most affluent individuals and powerful corporations accumulating more wealth — and wielding more power, and facing fewer limits, to treat workers and consumers as they choose — while tens of millions of struggling Americans must reduce their already modest standards of living.

The budget comes just weeks after the President and Congress enacted a top-heavy tax cut, one that the Tax Policy Center estimated will give those who make more than $1 million a year an average annual tax cut of $70,000 — more than the entire annual income of the median-income household.  Nevertheless, the budget calls for slashing one program after another that provides basic assistance for large numbers of Americans of modest means and promotes upward mobility.

The budget also violates the spirit of the bipartisan agreement that congressional leaders negotiated just a few days ago, by dropping most of the restored funding that the deal provides in 2019 for non-defense discretionary (NDD) programs, while maintaining the deal’s defense funding increases. NDD includes education and training, scientific and medical research, transportation and infrastructure, low-income housing, environmental protection, the national parks, and the like.

This violation extends to specific programs as well.  For example, the bipartisan agreement calls for adding $2.9 billion per year over the next two years to the discretionary Child Care and Development Block Grant, boosting this key federal program to help make child care affordable for low- and modest-income parents.  But the budget reneges on that and proposes essentially flat funding for the program. The Administration’s blatant dismissal of a major bipartisan agreement on which the ink is barely dry may make bipartisan agreements harder to reach in the future.

And then, in years after 2019, the budget calls for cuts of unprecedented depth in non-defense discretionary programs even though that’s the part of the budget that contains many federal investments in long-term economic growth.  By 2028, funding for non-defense discretionary programs would fall 42 percent below the 2017 level, after adjusting for inflation.  Indeed, by 2028, total NDD spending, measured as a share of gross domestic product, would be at its lowest level since Herbert Hoover was President.

The budget disappoints in other ways as well.  Like the President’s first budget, this budget once again uses unrealistic economic and revenue assumptions to artificially reduce projected deficits and debt.  The President continues to assume much larger impacts on economic growth and federal revenue from his tax-cutting and other policies than non-partisan experts find likely.  We expect the Congressional Budget Office’s assessment of the budget to again show its fiscal claims to be unreliable.

The budget further disappoints in its highly touted infrastructure package, which turns out to be something of a shell game — cutting key existing infrastructure programs to shift funds to a shiny, though poorly conceived, Trump infrastructure package that shirks federal responsibilities in this area by relying unrealistically on states, cities, and private parties to come up with the vast bulk of needed funding.

The budget is a key way in which a President leads.  And our nation faces serious fiscal challenges that demand serious leadership.  But rather than a budget that reflects such leadership, this is a budget that rests on rosy economic and other assumptions and gimmicks, obscures the fiscal challenges we face, and proposes policies that maintain the huge new tax cuts that the wealthy and powerful received from last year’s tax bill while delivering one blow after another to those who are down on their luck.

This budget would widen inequality, worsen poverty and hardship, and further divide the country.  With it, the President essentially calls on us to ignore what Lincoln called “the better angels of our nature” — and instead to enter a new Gilded Age. 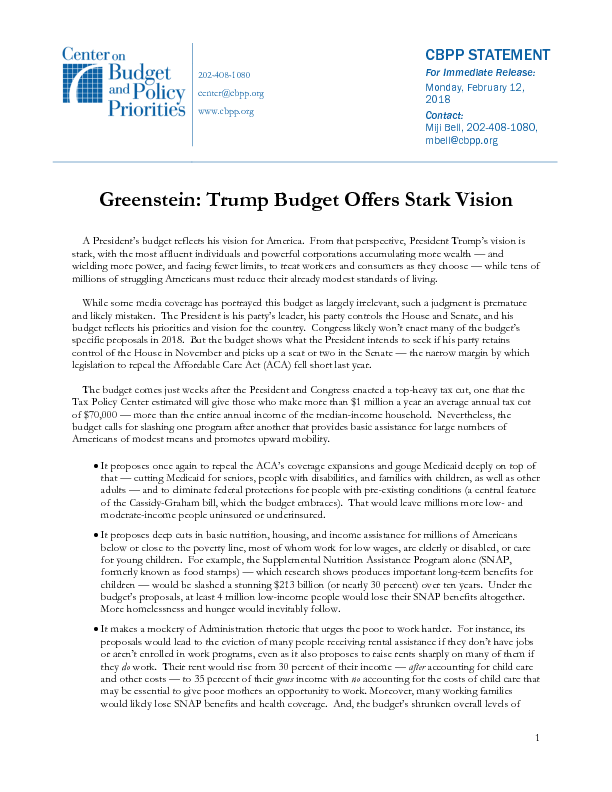