Today’s devastating jobs report confirms that the economy is in a serious recession.  Good policy in the months ahead is vital to limit the damage, but even so this recession is likely to be the longest, and possibly one of the deepest, since World War II.

Today’s report also makes it more likely that unemployment will reach 9 percent by the end of 2009, as Goldman Sachs has predicted.  The Center on Budget and Policy Priorities estimates this could swell the number of Americans living in poverty by up to 10 million and the number of Americans in deep poverty, with incomes below half the poverty line, by up to 6 million, as explained below.

This week the National Bureau of Economic Research determined that a recession began in December 2007.  In the ensuing 11 months, employers have shed jobs each month and the losses have accelerated sharply in recent months.  Overall labor market trends are grim.

The current recession is 11 months long and counting.  If this were the average post-World War II recession, it would have lasted 10 months and ended in October (see Figure 1).  If it were like the most recent two recessions it would have ended in August.  Instead recent economic conditions point to a continuing contraction in economic activity, which, if it continues past April 2009 as economic forecasters increasingly think it will, would produce a recession longer than any in the postwar record. 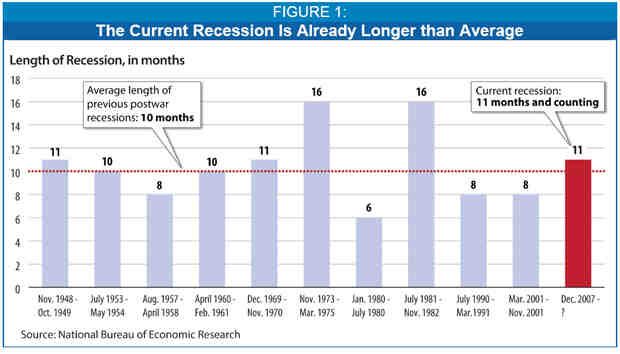 Past recessions have been accompanied by protracted spells of joblessness for unemployed workers and increases in poverty and hardship for low-income Americans.  The Center has examined the relationship between rising unemployment and growing poverty in each of the last three recessions.  If the same relationship holds in this recession and unemployment reaches 9 percent, the number of people in poverty will rise by 7.5-10.3 million, and the number living below half the poverty line will rise by 4.5-6.3 million.  The increase just in the number of children living below half the poverty line will be 1.5-2 million.

As the Congress and President-elect Obama prepare an economic recovery package, it is important to remember that support for unemployed workers and those with limited means not only helps those hit hardest in a recession but is among the most effective and fast-acting ways to help arrest an economic contraction and turn the economy around.