Commentary: Under Current Poverty Programs, It Pays to Work, Despite House Republicans’ Contentions

Nevertheless, leading up to the release of their forthcoming plan to address poverty, House Republicans continue to claim that the low-income assistance system strongly discourages work.  They have said that people receiving assistance from these programs often receive more, or nearly as much, from not working — and receiving government aid — as from working.  Or they’ve argued that low-paid workers have little incentive to work more hours or seek higher wages because losses in government aid will cancel out the earnings gains.  They may repeat such claims in the coming days.  But our research has found that these assertions don’t withstand scrutiny.

Our review of an important Congressional Budget Office (CBO) study,[2] as well as other data and research, found:

The 2010 Affordable Care Act (ACA) significantly reduced work disincentives for many working-poor parents.  Before health reform, Medicaid eligibility for working parents in the typical (or median) state ended at just 61 percent of the poverty line, creating a substantial work disincentive “cliff.”  Health reform changed this markedly, especially in the 31 states and the District of Columbia that have adopted its Medicaid expansion.  In those states, working parents remain eligible for Medicaid until their income reaches 138 percent of the poverty line, and those whose earnings rise above that level qualify for subsidies to purchase health coverage in the new insurance marketplaces if they lack access to affordable employer-based coverage.

In this vein, the House Republicans’ poverty plan needs to be considered in conjunction with their health plan, expected to be issued later this month, which likely will propose to repeal health reform’s coverage provisions, including the Medicaid expansion.  That would reverse the progress on promoting work incentives that the ACA has advanced.

A comprehensive review of the research on the effects of different aspects of the safety net on work found that the behavioral response is small enough, in aggregate, that it has little or no impact on the degree to which the safety net lifts people out of poverty.[4]  A number of factors, beyond the fact that most poor workers face low marginal tax rates, may account for the small behavioral response.  Many low-wage workers have limited flexibility to adjust their work schedules without threatening their job status.  And many workers likely conclude that working more hours or accepting a promotion will benefit their careers over the long term.  In addition, many families don’t fully understand how benefits (particularly tax credits) adjust as earnings rise and don’t make the technical marginal-rate calculations that certain economic theories assume, research also shows.

Policymakers should not ignore those circumstances in which marginal tax rates can be quite high.  But it’s important they also recognize that such circumstances are concentrated among a small fraction of families with earnings just above the poverty line that receive benefits from a number of programs that phase down simultaneously — and, just as importantly, that reducing such marginal rates involves very difficult tradeoffs.

There are really only two options to lowering marginal tax rates.  One is to phase out benefits more slowly as earnings rise; this reduces marginal tax rates for those currently in the phase-out range.  But it also extends benefits farther up the income scale and increases costs considerably, a tradeoff that many policymakers may not want to make.  The second option is to shrink (or even eliminate) benefits for people in poverty so they have less of a benefit to phase out and thus lose less as benefits are phased down.  This reduces marginal tax rates, but it pushes poor families into — or deeper into — poverty and increases hardship, and thus may cause significant harm to children in these families.  In effect, the second option would “help” the poor by making them worse off.

We will soon find out whether the new House Republican poverty plan addresses this conundrum.  The solution that some who use marginal-tax-rate arguments to attack safety net programs have advanced in the past — block grants with extensive state flexibility — does nothing to resolve these inevitable tradeoffs.  Block grants would merely pass the buck in making these tradeoffs from federal to state decision-makers.

[3] This calculation excludes the value of health benefits, which, in most states, would not be affected in these scenarios, because the mother and her children would remain eligible for Medicaid.  The calculation also doesn’t include extra costs from working, such as child care expenses, or subsidies to help cover those expenses.

[4] Yonatan Ben-Shalom, Robert Moffitt, and John Karl Scholz, “An Assessment of the Effectiveness of Anti-Poverty Programs in the United States,” Institute for Research on Poverty, Discussion Paper no. 1392.11, revised June 2011. 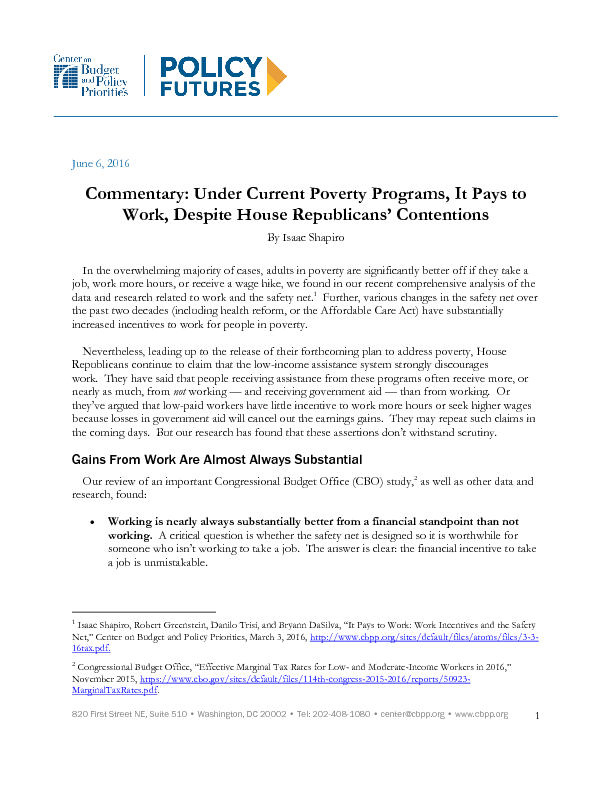 PDF of this commentary (4 pp.)