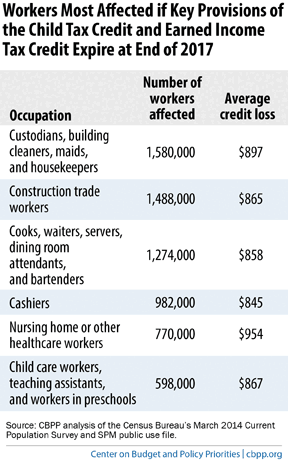 In 2009, policymakers lowered the earnings needed to qualify for a partial CTC, thereby expanding the credit for millions of low-income working families and making other families newly eligible for a partial credit.  They also raised the income level at which the EITC begins to phase down for married couples to reduce the marriage penalty some two-earner families face in the EITC.  And they boosted the EITC for families with more than two children to help them cover their higher living costs. But unless policymakers act, these provisions will expire at the end of 2017, causing millions of low-income working families to lose all or part of their CTC and EITC.  More than 16 million people, including almost 8 million children, would be pushed into — or deeper into — poverty. The affected families work in a diverse range of jobs, from nurses to custodians, as this table shows. If the provisions expire: The next post in this series will highlight the need to strengthen the EITC for the only group the federal tax system taxes into poverty: childless workers.
Related Posts:
Topics:
Federal Tax, Personal Taxes, Tax Credits for Individuals and Families
PreviousMedicaid-Eligible Children Grow Up to Earn More and Pay More in Taxes
NextMedicaid Eligibility for Low-Income Adults Lags Badly in Non-Expansion States
Stay up to date
Receive the latest news and reports from the Center