| By Chuck Marr
As Congress returns to work this week, a key area of potential bipartisan agreement is strengthening two vital tax credits for working families: the Earned Income Tax Credit (EITC) and Child Tax Credit (CTC).  This series of posts will highlight our new chart book on the credits, which encourage work, help offset the cost of raising children, and lift millions out of poverty.  (Roughly half the states also have their own EITCs to build on the benefits of the federal EITC.) The EITC and CTC have historically received bipartisan support.  President Obama has championed measures to strengthen the credits and Paul Ryan, ascending this year to chairing the House Ways and Means Committee, has highlighted the EITC as one of the most effective anti-poverty programs. The first step in strengthening the credits is to make permanent key EITC and CTC features that will expire at the end of 2017, causing millions of low-income working families to lose all or part of their credits.  More than 16 million people in working families with low or modest incomes, including 8 million children, would fall into — or deeper into — poverty in 2018 if these provisions expire.
Image 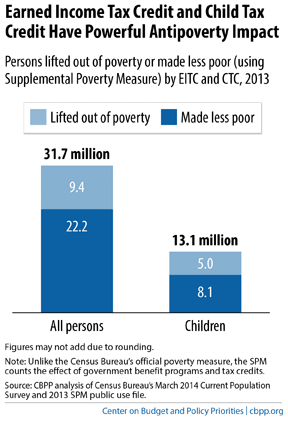 In addition, President Obama and Chairman Ryan have nearly identical proposals to fill a glaring gap in the EITC by boosting the credit for “childless workers” — that is, adults without children and non-custodial parents.  Childless workers receive little or nothing from the EITC. Substantial research over the past 15 years supports these changes.  The EITC significantly increases recipients’ work effort, numerous studies have found, and the EITC and CTC together lift 9 million people out of poverty — more than any other federal program besides Social Security — while making 22 million others less poor (see chart).  The credits lift more children out of poverty than any other program. On top of these direct impacts, recent research suggests that income from these credits has benefits at virtually every stage of life for children in recipient families — improving school performance, college enrollment, and work effort and earnings in adulthood. Policymakers should make strengthening the EITC and CTC a top priority in 2015. Check out our chart book and other EITC and CTC resources for more! Stay tuned.  The next post in this series will highlight the growing body of research that suggests the EITC and CTC provide benefits at virtually every stage of life.
Related Posts:
Topics:
Federal Tax, Personal Taxes, Tax Credits for Individuals and Families

Share
Facebook Twitter Print Email
PreviousWho Are the People Who Will Lose SNAP Next Year?
NextIRS Funding Cuts Harm Customer Service and Raise Deficits
Stay up to date
Receive the latest news and reports from the Center