The House Ways and Means Committee passed legislation today to expand the Child Tax Credit (CTC) in ways that, as we highlighted yesterday, have things upside down — providing a permanent new CTC expansion for families well up the income ladder, while effectively letting expire a key CTC improvement of 2009 that has enabled more low-income working families to receive the credit and thereby lifted large numbers of children in these families out of poverty. The bill would raise the credit’s top income eligibility thresholds.  It also would index for inflation those thresholds and the maximum credit amount of $1,000 per child.  During the Committee’s deliberations today, Chairman Dave Camp (R-MI) suggested that the bill would help all families, including those with low incomes, because it indexes the maximum credit amount.  That’s incorrect. Indexing the maximum credit only benefits families with incomes high enough to qualify for it.  And because the Ways and Means bill fails to make permanent the CTC provision originally enacted in 2009 that has enabled many more working-poor families to qualify for the CTC or to receive a larger CTC, millions of low-income families would lose their CTC and get no credit at all after 2017, while many others would no longer qualify for the maximum credit. The 2009 improvement made more working-poor families eligible for the CTC and enlarged it for others by beginning to phase the credit in as a family’s earnings rose above $3,000 (instead of not starting to phase in the credit until a family had earned far more than that).  This critical improvement, along with important enhancements to the Earned Income Tax Credit (EITC) also first enacted in 2009, was extended through 2017 under the “fiscal cliff” law of early 2013 that made most of President Bush’s tax cuts permanent. The Ways and Means Committee bill enlarges the CTC for many families with six-figure incomes and makes those expansions permanent, but it lets the improvement for working-poor families expire on schedule at the end of 2017.  As we explained in our earlier post,

Some Committee members raised this stark inequity this morning.  In response, Chairman Camp said that the bill’s indexing provision would benefit all families eligible for the credit — including those at the lower end of the income scale.  But that’s not the case. First, beginning in 2018, families making less than about $14,500 a year — the amount that a full-time minimum wage worker earns — will no longer receive any CTC.  Indexing would do nothing for the many working families who could no longer receive the credit. Second, indexing the maximum credit amount matters only to people who receive the maximum credit of $1,000 per child.  If Congress fails to make the 2009 improvement permanent, many low-income families with incomes somewhat above $14,500 will see their credit cut and will not receive the maximum amount.  In fact, under the bill that Ways and Means passed today, indexing won’t benefit a family with two children in 2018 until they have earnings of at least $28,050 — nearly double what full-time minimum-wage work pays an individual. As we previously explained, and as the chart below shows, the net effect is that the bill’s failure to extend the 2009 improvement will hurt low-income filers.  Only those higher up the scale will benefit from the inflation indexing.  And the families benefiting the most from the bill will primarily be families with six-figure incomes.
Image 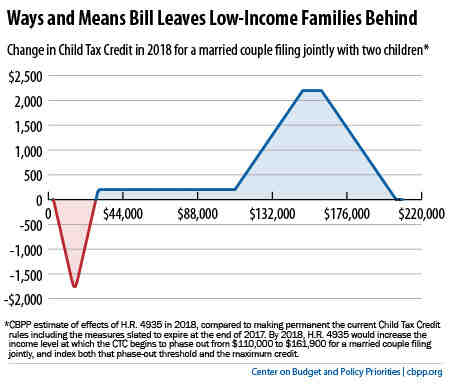 The mischaracterization of the bill’s impacts underscores a key fact — the Ways and Means Committee’s most pressing priority regarding this credit should be to make permanent the recent improvement in it (and the accompanying EITC improvements) for low-income working families.  Those families face much greater challenges in being able to afford to meet their children’s basic needs than the families who would be the big tax-cut winners under this bill.
Related Posts:
Topics:
Federal Tax, Poverty and Inequality, Personal Taxes, Working Family Tax Credits
PreviousLower Recidivism: Yet Another Good Reason for States to Expand Medicaid
NextWhat to Look for in the Upcoming SNAP Figures
Stay up to date
Receive the latest news and reports from the Center