| By Chuck Marr
Speaking at the American Enterprise Institute this week, House Majority Leader Eric Cantor called for an agenda “of creating the conditions of health, happiness, and prosperity for more Americans” so that “every American has a fair shot to earn success and achieve their dreams.”  Proposals would be based on conservative values that include “self-reliance, faith in the individual, trust and family.” Those words could well apply to the Earned Income Tax Credit (EITC) and the Child Tax Credit (CTC).  These tax credits, which have long received well-deserved bipartisan support, embody conservative values:  they encourage parents to be self-reliant, to take responsibility, and to work hard at jobs so that they can do their best for their children.  They encourage work over welfare.  And they aim to achieve the American ideal of giving everybody, in Cantor’s words, a “fair shot to earn success.” At one point in his speech, Cantor turned to taxes, in particular, saying that “tax reform should reflect the priority of working families and the future they’re trying to shape for their kids.”  He even singled out the CTC, noting that a Republican Congress created it in 1997 and policymakers expanded it in 2001.  That 2001 expansion made the credit available to many working poor families for the first time. Policymakers made further improvements to both the EITC and CTC in 2009.  They expanded the CTC to allow more working poor parents to receive it.  And they amended the EITC in a pro-marriage direction — reducing marriage penalties by strengthening benefits for married couples, and enhancing the credit for families with three or more children.  The 2009 improvements lifted 1.5 million Americans out of poverty in 2011, the latest year for which these data are available (see chart).
Image 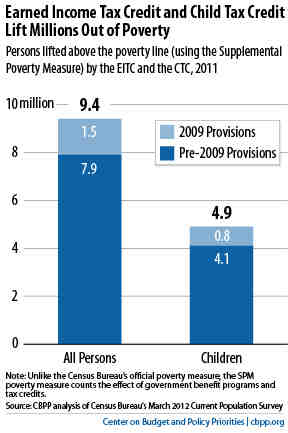 The recent fiscal cliff tax law made most of President Bush’s 2001 and 2003 tax provisions permanent — but not these improvements to the CTC and EITC, which policymakers instead extended for five years. Making these vital improvements permanent would be consistent with Cantor’s remarks.  It would enable these tax credits to continue to improve the lives of working families and would advance values that are dear to policymakers on both sides of the aisle.
Related Posts:
Topics:
Federal Tax, Poverty and Inequality, Personal Taxes, Business Taxes, Tax Credits for Individuals and Families