What Is NDD Spending?

With the fiscal year 2015 appropriations process underway and Congress starting to write spending bills for next year, observers often have questions about technical terms that litter budget debates.  One such term is “NDD spending.” Non-defense discretionary (NDD) programs comprise domestic and international programs outside of national defense that Congress funds on an annual basis.  (That is, they exclude “entitlement” programs such as Social Security, Medicare, and Medicaid that actually dominate the budget.)  NDD programs include a broad set of public services, including environmental protection, education, job training, border security, veterans’ health care, scientific research, transportation, economic development, some low-income assistance, law enforcement, and international assistance. In 2013, NDD spending totaled $576 billion, or 17 percent of federal spending, as we explain in our updated backgrounder.  Of that total, 34 percent went to grants to states and localities, such as for K-12 education and highway projects, while 21 percent went to low-income programs, such as Head Start and low-income housing assistance.  These categories are not mutually exclusive; a sizable share of grants to states and localities support low-income programs. NDD spending is set to fall over the next decade as a share of the economy.  The 2011 Budget Control Act (BCA) set limits or “caps” on annual discretionary funding through 2021, imposing separate caps for defense and non-defense funding.  In addition, the BCA mandated automatic further cuts — called “sequestration” — after Congress failed to adopt a more comprehensive deficit-reduction plan by January 2012. Under current policies including the sequestration cuts, NDD spending is projected to fall to its lowest level as a share of gross domestic product (GDP) on record in 2016, with data going back to 1962, and it will continue to fall thereafter (see chart).
Image 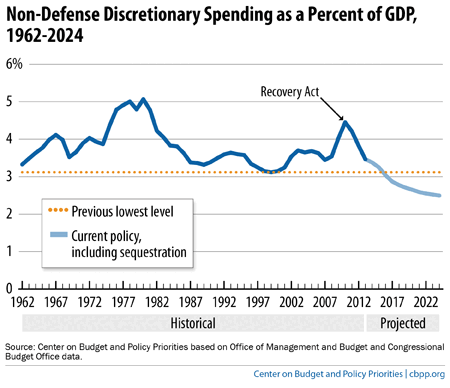