I explained earlier today that housing vouchers make a big difference for minority families’ ability to live in a low-poverty neighborhood.  They also help poor black and Hispanic families with children avoid neighborhoods of concentrated poverty.

Researchers generally agree that living in neighborhoods of extreme poverty, in which 40 percent or more of the inhabitants are poor, is particularly harmful to children.  Nationwide, nearly 15 percent of poor children live in such neighborhoods.  These neighborhoods are more likely than others to have high rates of crime and violence, poorly performing schools, few college-educated adults, low employment rates, and limited opportunities for physical recreation.

Extreme-poverty neighborhoods are predominantly African American and Latino.  Poor black and Hispanic children are more than five times as likely to live in a neighborhood where 40 percent or more of the residents are poor than poor non-Hispanic white children.  Living in an extremely poor neighborhood may be particularly harmful for children when families live in such neighborhoods for several generations, as occurs more among African American families.

But housing vouchers improve these statistics substantially for poor black and Hispanic families with children.  For these families, vouchers cut their likelihood of living in extreme-poverty neighborhoods by nearly half for black children and more than a third for Hispanic children, compared with poor children of the same race or ethnicity (see chart). 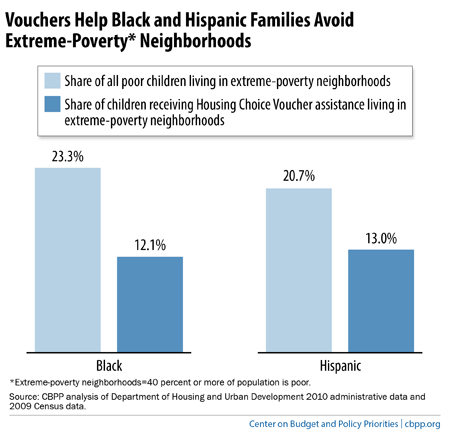 These are encouraging statistics, but the Housing Choice Voucher program can do more to deliver on its potential to help families avoid living in neighborhoods likely to hurt their children’s economic prospects and future health, as we detail in our recent paper.  We’ll look at these recommendations in greater detail in a future post.