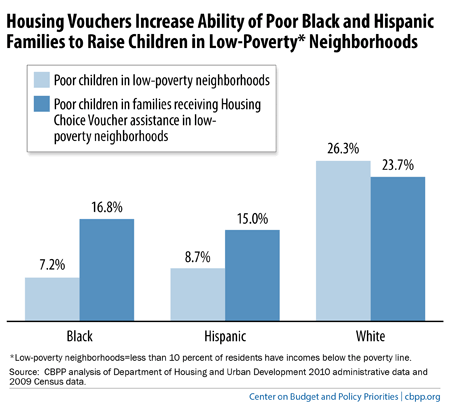 For minority families, using a voucher to rent housing also slightly improves the schools that their children are likely to attend, compared with their poor counterparts.  The median school nearest to both black and Hispanic voucher holders ranked higher on math and reading tests than the median school nearest to poor black and Hispanic households generally. At least some of this positive impact of voucher assistance on black and Hispanic families’ access to low-poverty communities likely results from moving to low-poverty suburban neighborhoods.  The share of black HCV recipients living in the suburbs of the 100 largest metropolitan areas rose by more than 12 percent between 2000 and 2008, helping to drive the overall increase over that eight-year period in the share of metropolitan vouchers used in suburban areas. These are positive trends, but more low-income families should be able to use their housing vouchers to live in high-opportunity neighborhoods and to access high-performing schools. We’ll discuss how vouchers affect minority families’ ability to avoid extreme-poverty neighborhoods in another post later today.