Steven Mnuchin, President-elect Trump’s nominee for Treasury Secretary, said today of Trump’s coming tax cut proposal, “Any reductions we have in upper-income taxes will be offset by less deductions so that there will be no absolute tax cut for the upper class.”  But his assertion, on CNBC this morning, is completely at odds with the tax plan that Trump announced during the campaign, which would provide a massive tax cut for upper-income taxpayers.

To be sure, the plan that Trump announced would limit itemized deductions for high-income taxpayers (to $100,000 for individuals, $200,000 for joint filers).  The value of the tax cuts that would disproportionately benefit the richest people, however, far outweighs the deduction limit.  Among other benefits for wealthy filers, the Trump plan would cut the top income tax rate, the top tax rate for wealthy partnerships, and the capital gains and dividends tax rate, and it would eliminate the estate tax on massive inheritances.

As a result, under the current Trump tax plan, the top 1 percent of taxpayers would receive by far the largest tax cut as a share of income — a 14 percent increase in after-tax income, the Tax Policy Center finds.  Meanwhile, the plan provides far less for those at the bottom or in the middle.  As the chart shows, after-tax income would rise just 0.7 percent for those in the bottom fifth and 0.9 percent for those in the next fifth. 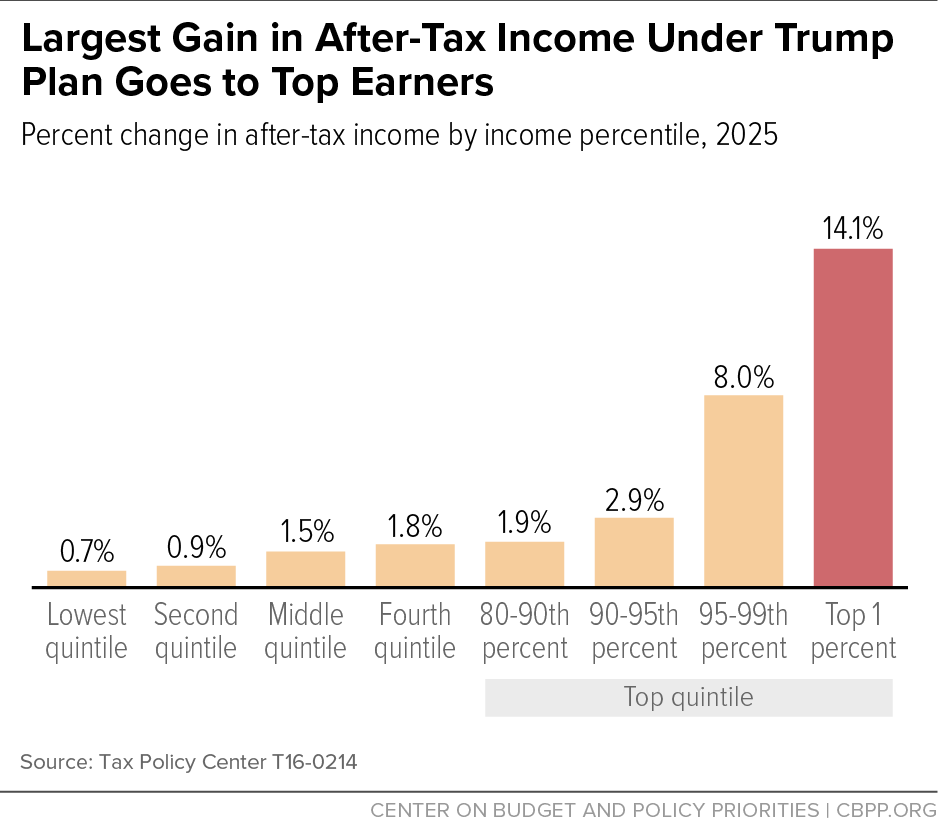 House GOP Framework Would Give Millionaires $2.6 Trillion in Tax Cuts, While Cutting Programs for Low- and Moderate-Income People by $3.7 Trillion

September 29, 2016
PreviousBlock-Granting Medicaid Would Limit State Flexibility to Innovate
NextMore Than 100,000 Families Could Be Frozen Out of Housing Vouchers for 2017
Stay up to date
Receive the latest news and reports from the Center