| By Chad Stone
Today’s jobs report marks the fourth anniversary of the start of the private-sector jobs recovery. Unfortunately, overall job creation (private plus government jobs) over that period has averaged just 168,000 a month — well below the 200,000 to 300,000 jobs a month that a robust jobs recovery would generate. As a result, payroll employment has not yet topped its December 2007 pre-recession peak, and unemployment remains too high — especially among the long-term unemployed, whose numbers swelled by 203,000 in February. With the job market still so far from full strength, lawmakers should act quickly to restore retroactively emergency federal jobless benefits, which they allowed to expire in December. Below are some charts to show how the new figures look in historical context. Click here for my full statement with further analysis.
Image 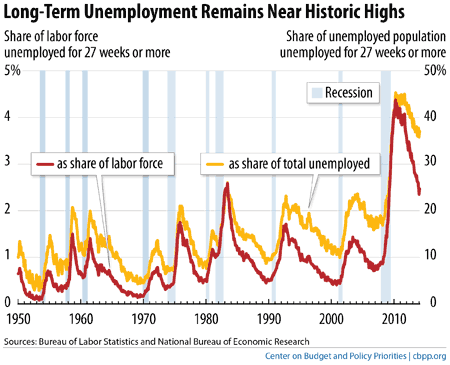