| By Chuck Marr
All discussions of tax reform should start with this chart.  Here’s why. The mantra that tax reform should “broaden the base and lower the rates” — in other words, scale back loopholes and other special tax breaks and use the resulting revenue to pay for cuts in marginal tax rates — is close to conventional wisdom in Washington.   All else being equal, it reflects sound economics.
Image 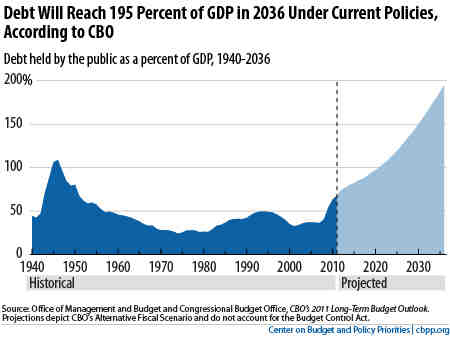 The problem for the United States is that all else is not equal, as the chart shows.  Our country is on an unsustainable fiscal track, with debt set to rise to economically damaging levels in coming decades if current policies remain unchanged. Given that fact, the responsible course would be to use the revenue generated from politically difficult base-broadening measures (like changes to the mortgage interest deduction) to help rein in long-term deficits. Unfortunately, some recent proposals — like House Budget Committee Chairman Paul Ryan’s — place a higher priority on cutting tax rates.  They would give the richest people in the country massive new tax cuts even if that meant no new revenues for deficit reduction and likely even expanding deficits further. The Ryan plan, which would force cuts in food assistance, health coverage, and other services for tens of millions of low-income Americans, also shows why spending cuts alone cannot bring deficits under control.  Instead we need a balanced deficit-reduction package that includes both tax increases and spending cuts.