A new Washington Post analysis of how the tax code encourages multinational corporations to shift investments and U.S.-earned profits to foreign tax havens — that is, very low-tax countries — is a must-read for policymakers considering corporate tax reform:

Companies now have an unprecedented ability to move their capital around the world, and the corporate tax code has not kept up with the changes.

Just the opposite, in fact. Experts say the U.S. code has encouraged companies to shift their income overseas, where it is more lightly taxed by the U.S. government. Many firms, in turn, have discovered that just as they can move their manufacturing to other parts of the world, so, too, can they shift their income to far-flung tax havens such as the Cayman Islands.

The result is lower revenue here that could pay for infrastructure, education and other services that support domestic growth — and that make life easier for U.S. firms.

As the Post notes, a recent Congressional Research Service analysis finds that U.S. multinationals report much of their profits in tax havens where they have few actual investments or workers (see first chart).

Shifting a large amount of U.S.-earned profits to foreign tax havens is one way that multinationals achieve a much lower overall tax rate for their foreign income (from tax haven and non-tax haven countries combined) than their domestic income, as the second chart shows.  (Various other tax breaks enable them to pay a lower share of their domestic profits in tax than the top statutory corporate tax rate of 35 percent.) 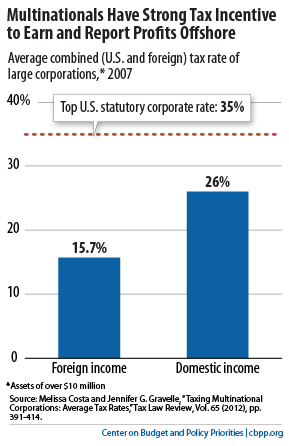 Sound corporate tax reform would minimize opportunities for such tax avoidance and stop the tax code from encouraging investment offshore, rather than at home.  It also would shrink deficits by strengthening corporate tax revenues.

A number of multinationals are pushing for a “territorial” tax system, which would mean even lower taxes on their foreign profits.  But, as a tax expert told the Post, their interests are not necessarily the same as those of the economy as a whole:

“When you get U.S. businesses coming to Washington and talking about ‘We need to do this and that for the U.S. economy,’ what does that even mean?” said Doug Shackelford, a professor of taxes at the University of North Caro­lina’s Kenan-Flagler Business School. “Who are they referring to? Is it U.S. workers? Is it U.S. shareholders?”

A territorial tax system might be good for corporate shareholders, but that doesn’t mean it would be good for America’s workers. Indeed it would risk lowering wages by increasing the incentive for multinationals to invest offshore.