Adopting a so-called “territorial” tax system, as some multinational corporations are lobbying Congress to do (see today’s press release from the Business Roundtable), would create greater tax incentives for multinationals to invest and move profits overseas rather than in the United States, our new report explains.  As a result, it would risk hurting domestic businesses, boosting deficits over the long run, and weakening the economy.

Currently, U.S.-based multinationals owe U.S. taxes on the income they generate at home as well as overseas; they get a credit for the foreign taxes they pay so that they aren’t taxed twice on the same income.

But multinationals don’t owe tax on much of their foreign profits until they bring them back to the United States.  So they can — and many do — defer U.S. tax indefinitely by keeping those profits overseas. 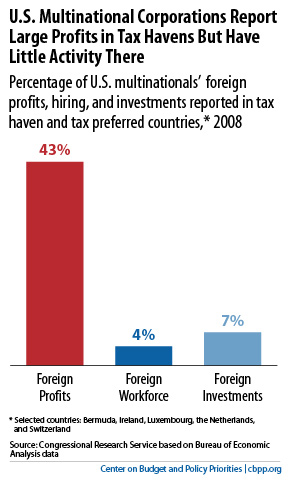 In a territorial system, a country generally taxes only the income that a corporation generates in that country.  Moving the U.S. system to a territorial one would create several major problems, as our paper explains:

A new Congressional Research Service (CRS) report finds that many multinationals already shift where they report profits from the United States to low-tax and tax haven countries where they have few taxes or investments in order to delay paying U.S. taxes (see graph).  A territorial system would make this practice still more lucrative.

Second, by encouraging capital to flow overseas, a territorial system would risk reducing wages at home. If a lower U.S. tax rate on foreign profits encourages capital to move offshore, basic economic theory predicts that the returns to U.S. capital would rise but that the wages of U.S. workers would fall.  As Jane Gravelle, a leading tax economist at the CRS, testified before Congress, “[Moving to a territorial system] would make foreign investment more attractive.  That would cause investment to flow abroad, and that would reduce the capital which workers in the United States have, so it should reduce wages.  A capital flow reduces wages in the United States [and] increases the wages abroad.”

Fourth, a territorial system would risk higher taxes on smaller businesses and domestic businesses. If policymakers sought to offset the lost revenues from a territorial system (and any cut in the U.S. corporate tax rate), they would likely do so by broadening the business tax base.  Business base broadening would have to rely on reducing large tax breaks for domestic activity (since overseas activity would be largely or entirely free of U.S. tax), thereby reducing incentives for domestic investment.  Thus, even if policymakers cut the top statutory tax rate as they adopted a territorial system, smaller domestic businesses could well face higher taxes.

Remaining States Should Opt Out of Costly Corporate Tax Break