What a “Territorial” Tax System Would Mean, in One Chart

BNA reports today that House Ways and Means Committee Chairman Dave Camp (R-MI) will soon propose a corporate tax plan that includes a “territorial” system of international taxation.  The business community is lobbying Congress aggressively for it, claiming it would help the economy, and many lawmakers may not fully understand what a territorial system would really mean.
Image 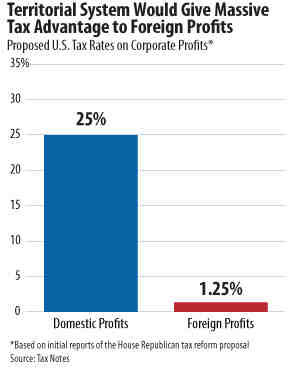 Here’s what would happen: For starters, Chairman Camp probably would set the overall corporate tax rate somewhere between 25 percent and the current 35 percent. He would then, according to BNA, give a 95 percent tax exemption to corporate profits earned abroad. That means that when a company employs people, invests, and makes profits in the United States, those profits would be taxed at 25 to 35 percent.  When a company invests overseas, those profits would face a U.S. tax rate of 1 to 2 percent. To see what that would mean in one simple picture, see the nearby chart. Giving foreign profits a massive permanent tax advantage over domestic profits would not help the economy. Worse, it would create a powerful incentive for companies to shift even more jobs and investments overseas. Picture going to, say, a hard-hit manufacturing area in Pennsylvania or Ohio and telling the families there that we can help turn things around by encouraging companies to hire and invest overseas instead of in the United States. They might disagree — and they would have good reason to do so. Let’s hope lawmakers consider their perspective and take a similarly skeptical approach to this supposed tax panacea.
Topics:
Federal Budget, Federal Tax, Budget Outlook, Personal Taxes, Business Taxes, Economy
PreviousCorporate Tax Holiday Would Be a Costly Mistake
NextBlock-Granting Medicaid Would Shift Costs to States
Stay up to date
Receive the latest news and reports from the Center