Child poverty has fallen over the last five decades, as we explained earlier and illustrate in our new chart book.  Those improvements have lasting effects:  researchers are finding that the same safety net programs that have helped reduce child poverty in the short term are also opening doors of opportunity for those children in the long run. Among the findings: Food stamps help children fare better for years.  A recent study of what happened when food stamps (now called SNAP) gradually expanded nationwide in the 1960s and early 1970s found that disadvantaged children who had access to food stamps in early childhood and whose mothers had access during their pregnancy had better health and educational outcomes as adults than children who didn’t have access to food stamps. Among other things, children with access to food stamps were less likely in adulthood to have stunted growth, be diagnosed with heart disease, or be obese.  They also were more likely to graduate from high school (see chart).
Image 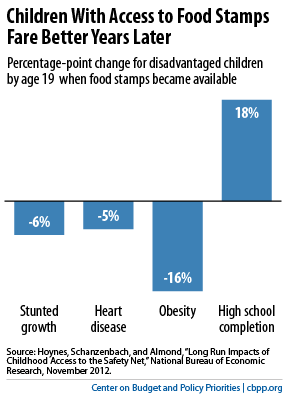 The earned income tax credit (EITC) boosts children’s academic performance — and their projected earnings later in life.  For example, raising family income through refundable tax credits (primarily the EITC) makes it more likely that children in the family will attend college and have higher earnings as adults, according to one study.  Another study followed children over a number of decades and found that those in low-income families that received an additional $3,000 in annual income (in 2005 dollars) between the children’s prenatal year and fifth birthday tended to earn an average of 17 percent more as adults, and work 135 hours more annually, than similar children whose families did not receive the added income. Click here for the full chart book.
Related Posts:
Topics:
Poverty and Inequality, Family Income Support
PreviousToday's Jobs Report in Pictures
NextSchools Lose 15,000 Jobs in December, Extending Damage Since Recession Hit
Stay up to date
Receive the latest news and reports from the Center