In a paper released today, we explain the problems inherent in the Tax Foundation’s annual “Tax Freedom Day” analysis.  Here’s the opening: 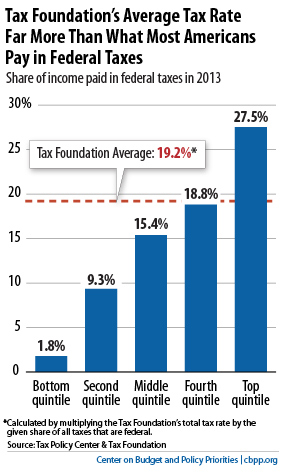 In a progressive tax system like that of the United States, only upper-income households pay federal tax at rates that are equal to or above federal revenues as a share of the economy.  Estimates from the nonpartisan Urban-Brookings Tax Policy Center show that low- and middle-income households (about 80 percent of all households) will pay a smaller share of their income in federal taxes this year than the Tax Foundation’s average tax rate.

The Tax Foundation acknowledges this issue in a methodology paper accompanying its report, noting that its estimates reflect the “average tax burden for the economy as a whole, rather than for specific subgroups of taxpayers.”  Consequently, those who report on Tax Freedom Day as if it represented the day until which the typical American must work to pay his or her taxes are misinterpreting these figures and inadvertently fostering misimpressions about the taxes that most Americans pay.

Why Revenue-Neutral Tax Reform Would Be a Big Mistake

January 8, 2013
PreviousSequestration Threatens to Cut Rental Assistance to 140,000 Families
NextAdministration Did Not Reverse a Proposed New Cut to Medicare Advantage Plans
Stay up to date
Receive the latest news and reports from the Center