Proponents of block-granting key safety net programs like Medicaid and SNAP, as the House budget plan would do, often cite Temporary Assistance for Needy Families (TANF) as a model.  But, as our new paper explains, a close look at how states have used TANF’s funds since its creation under the 1996 welfare law provides a cautionary tale about the dangers of block-granting these programs and giving states extensive flexibility on using the funds.  The cash assistance safety net for the nation’s poorest families with children has weakened significantly under the TANF block grant.

Beginning in TANF’s early years, when the economy was strong, shrinking cash assistance caseloads freed up federal and state funds that had gone to poor families in the form of benefits.  States used the flexibility of the block grant to redirect those funds.

Some of the freed-up funds initially went to child care and welfare-to-work programs to further welfare reform efforts.  But over time, states redirected much of their state and federal TANF funds to other purposes, in some cases to replace state spending on other priorities.  And when need increased during the Great Recession, states often did not direct the funds back to core welfare reform services and instead made cuts in basic assistance, child care, and work programs.

Our examination of state spending data for 2013 found: 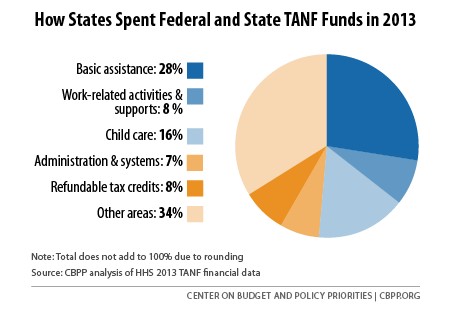 States Can Use Medicaid Flexibility to Boost Health and Cut Costs