TANF at 22: States Spend Just Half of Their TANF Funds in Core Welfare Reform Areas

Twenty-two years ago this week, on August 22, 1996, President Clinton signed a law creating the Temporary Assistance for Needy Families (TANF) block grant and radically restructuring cash assistance for families with children living in poverty. Our week-long blog series examines TANF’s role — and its performance — in helping parents work and in providing modest but crucial anti-poverty support. Today’s post looks at how states have spent their TANF dollars.

Under the TANF block grant, states get a fixed amount of federal funding each year and must also contribute some state funding. In drafting the 1996 law, federal policymakers gave states broad flexibility in how they can spend these federal and state TANF funds on the theory that states would invest the savings from declining cash assistance caseloads into work programs and work supports, such as child care or transportation. But that isn’t what happened. States now spend only slightly more than half of their TANF funds in the core welfare reform areas of cash assistance and work; they spend the rest in non-core areas. That’s an important reason why TANF serves so few families in poverty and states have meager work programs, as earlier posts in this series explained.

Nationally, in 2016 states spent 54 percent of TANF federal and state funds on cash assistance and work, including work programs, child care, and other work supports or supportive services. More specifically, they spent 24 percent of funds on basic assistance for low-income families, 12 percent on work activities and work supports, and 17 percent on child care for low-income families (see pie chart).

Meanwhile, states spent almost half of their TANF dollars in non-core areas that year. Some spending went for program management (including administrative costs) and refundable tax credits for low-income families. States spent their remaining TANF funds elsewhere, including 7 percent on pre-kindergarten and 7 percent on child welfare; while services like these are important investments, they shouldn’t come at the expense of providing the core services of welfare reform to families in crisis. 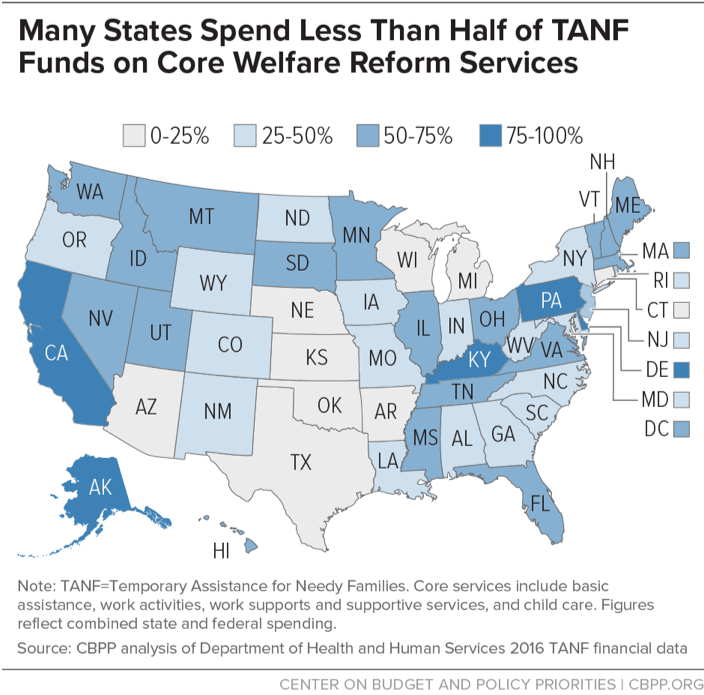 States’ spending flexibility under TANF has allowed them to shift resources outside of core welfare reform activities, leaving TANF-eligible families with less support during times of need. When policymakers reauthorize TANF, they should ensure that states invest in TANF’s core welfare reform areas by requiring them to spend at least 60 percent of their federal and state TANF funds each year on cash assistance, child care, and work activities and supports.

TANF at 22: Cash Income Is Vital to Families Living on the Edge

TANF at 22: Its Work Programs Do Little to Help Needy Parents Get Work

August 23, 2018
PreviousTANF at 22: Its Work Programs Do Little to Help Needy Parents Get Work
NextIn Case You Missed It…
Stay up to date
Receive the latest news and reports from the Center