Insurers have begun to submit, to states, the rates they want to charge for coverage in 2014, and their proposals show that the new, federally financed premium subsidies that health reform will make available in 2014 will help reduce what low- and moderate-income people will have to pay for coverage.  In many cases, the subsidies — for which people up to 400 percent of the poverty line will be eligible — will more than compensate for the average premium increases that health insurers are warning about in the individual insurance market, as we’ve explained.

Take Oregon, where the Insurance Division provides transparent information about the rates that insurers have proposed for the individual and small-group insurance markets and examples of how much people would pay in different parts of the state under the proposed rates.  (The rates are still under review.)

The chart below, which illustrates an example drawn from Oregon’s proposed rates, illustrates how subsidies would cut insurance costs for several sample enrollees.  The subsidies are based on the cost of a benchmark plan available in the Portland area and are structured so that people won’t pay more than a set percentage of their income for basic coverage.

As the example shows, people with lower incomes will get more help paying their premiums than people with higher incomes.  The subsidies will also take age into account, so enrollees’ contributions will be the same no matter their age, even though the base price of plans will be higher for people who are older compared to those who are young.  (In addition to the premium subsidies, people at lower income levels also will be eligible for help with the deductibles and co-payments charged under their plans.)

The story is similar in California, where officials announced yesterday the plans that the state’s insurance exchange, known as Covered California, is likely to offer.  The announcement also included preliminary information about sample rates, which showed how subsidies could significantly reduce what low- and moderate-income people will pay for coverage.

These subsidies will make health coverage more affordable for millions of people.  In a future post, we’ll explain how these enrollees can further reduce or increase their premium contributions depending on which plan they pick. 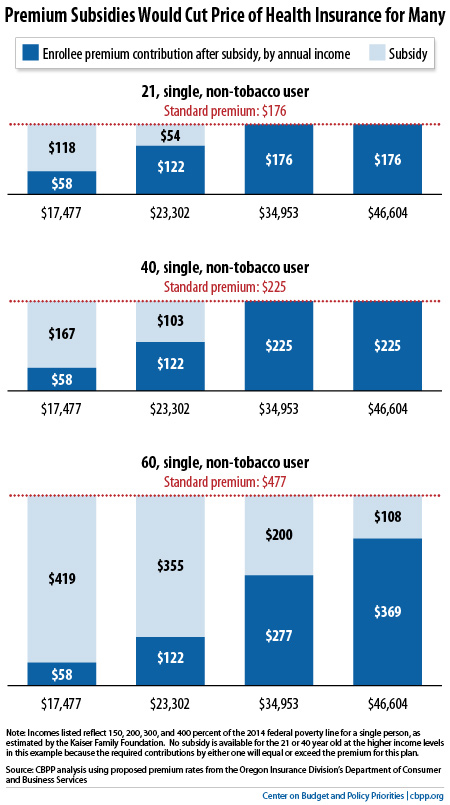 May 20, 2013
PreviousThree Reasons Why Killing the Corporate Income Tax Is a Terrible Idea
NextIn Case You Missed It...
Stay up to date
Receive the latest news and reports from the Center