Since the Trump Administration issued new rules last year expanding short-term health plans, which are exempt from the Affordable Care Act’s (ACA) benefit standards and protections for people with pre-existing conditions, a dozen states have strengthened their own limits and consumer protections for short-term plans. Others should follow suit.

The new federal rules define short-term plans as those lasting less than a year, up from three months under the previous rules, and let insurers extend them for longer. That lets a market for skimpy plans operate alongside the market for comprehensive individual health insurance, exposing consumers to new risks and raising premiums for those seeking comprehensive coverage — especially middle-income consumers with pre-existing conditions.

Short-term plans don’t have to cover all of the ACA’s essential health benefits, and they often don’t cover such essential benefits as maternity and mental health care, substance use disorder treatment, and prescription drugs. They can also deny coverage or charge higher prices to people with pre-existing conditions, and they typically don’t cover medical services related to a pre-existing condition.

Short-term plans can offer healthier people lower premiums (because they include fewer benefits and cover less costly populations), so they lure healthy enrollees away from the individual and small-group markets, leaving a less healthy and thus costlier group behind. This dynamic, known as adverse selection, will likely raise premiums for traditional, more comprehensive health coverage and undermine ACA protections for people with pre-existing conditions. Meanwhile, healthy people who enroll in short-term plans may face gaps in coverage and catastrophic costs if they get sick and need care.

The rules took effect in early October, just before the November 1 start of the ACA’s open enrollment period, creating confusion for consumers because they had limited time to sign up for comprehensive 2019 ACA plans and were subjected to heavy marketing from companies selling short-term plans as an alternative.

A federal court upheld the Administration’s final rules in what’s expected to be an ongoing legal battle. Fortunately, states can set their own standards for short-term plans, and some have done so since the new federal rules came out.

Massachusetts, New Jersey, and New York already had effectively prohibited short-term plans, and Rhode Island’s standards (including no pre-existing condition exclusions and a requirement to spend at least 80 percent of premiums collected on medical care) have blocked short-term plans in that state. Oregon already limited short-term plans to three months and restricted renewals. Several other states have protections that may mitigate the effects of the federal rule changes. (See map.) 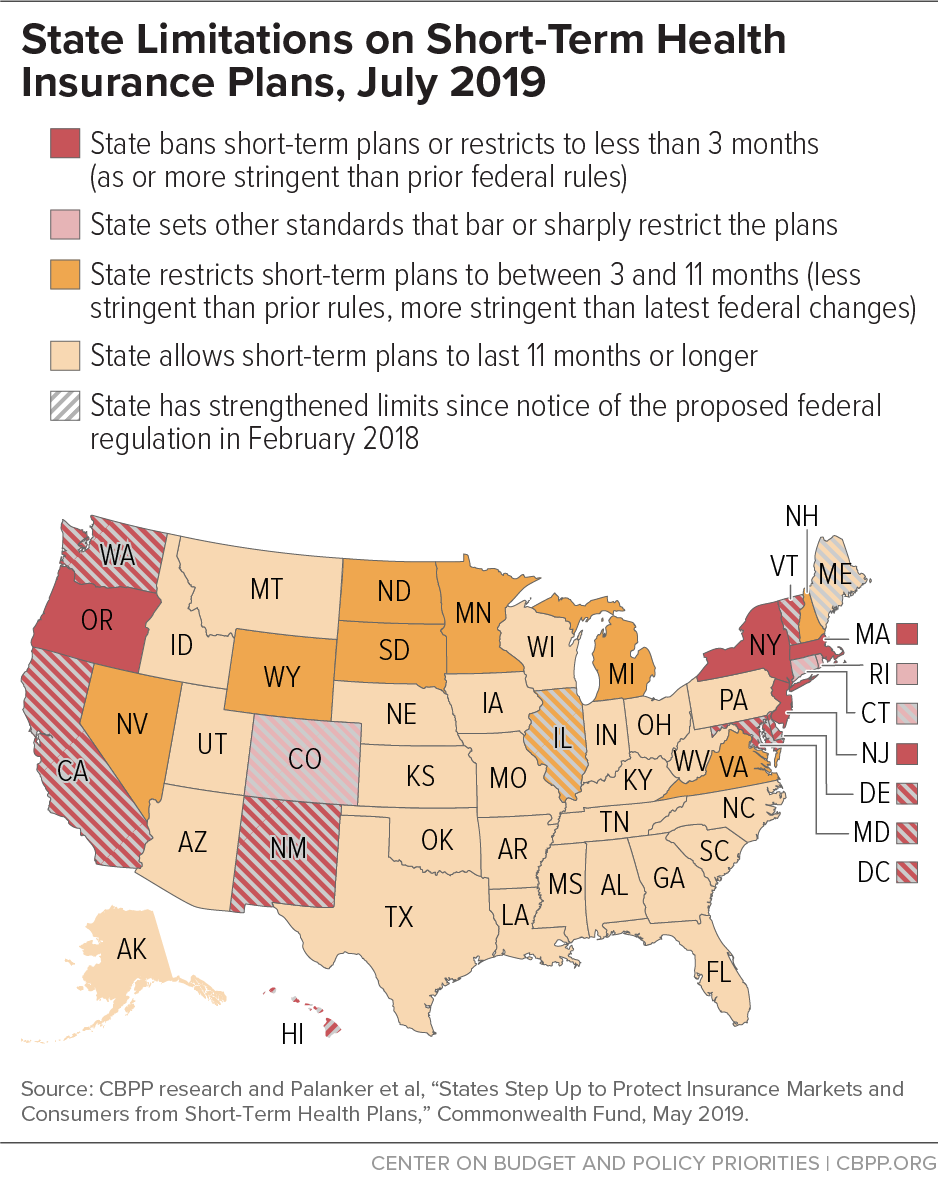 Yet most states lack sufficient protections against potential adverse selection due to the federal rule change, as well as to Administration changes that promote association health plans and expand health reimbursement arrangements. Meanwhile, some states are moving in the wrong direction: Indiana, for example, rolled back the state’s six-month limit on short-term plans, as did Arizona.

Despite Administration efforts to undercut the ACA, states retain broad authority to protect consumers and create a level playing field for insurers in their individual and small-group markets — and insurers, patient groups, and consumer advocates have urged them to exercise it. States that haven’t yet acted should do so.

3 Factors That Will Determine the Damage From Association Health Plans

July 24, 2019
Previous6 Things Millennials Should Know About Social Security
NextStates Should Act to Avoid Insurance Market Disruption, Consumer Confusion Under New Rule
Stay up to date
Receive the latest news and reports from the Center