As President Trump sends mixed signals about his support for a new economic relief bill, states and localities urgently need additional fiscal aid so they can both rehire workers they laid off or furloughed this spring and avoid additional layoffs and budget cuts that they will likely otherwise make to balance their budgets this fiscal year.

After COVID-19 struck this spring, states and localities laid off or furloughed over 1 million workers, more than the 750,000 that they laid off over the full course of the Great Recession of about a decade ago.

Only a modest portion of those jobs have returned. There were still 1.2 million fewer state and local employees in September than February, after adjusting for normal seasonal variations, according to new Bureau of Labor Statistics data. Compared to September of last year, there were 1.1 million fewer state and local jobs this September. That large decline compared to last year has been apparent for months now. (See chart.) 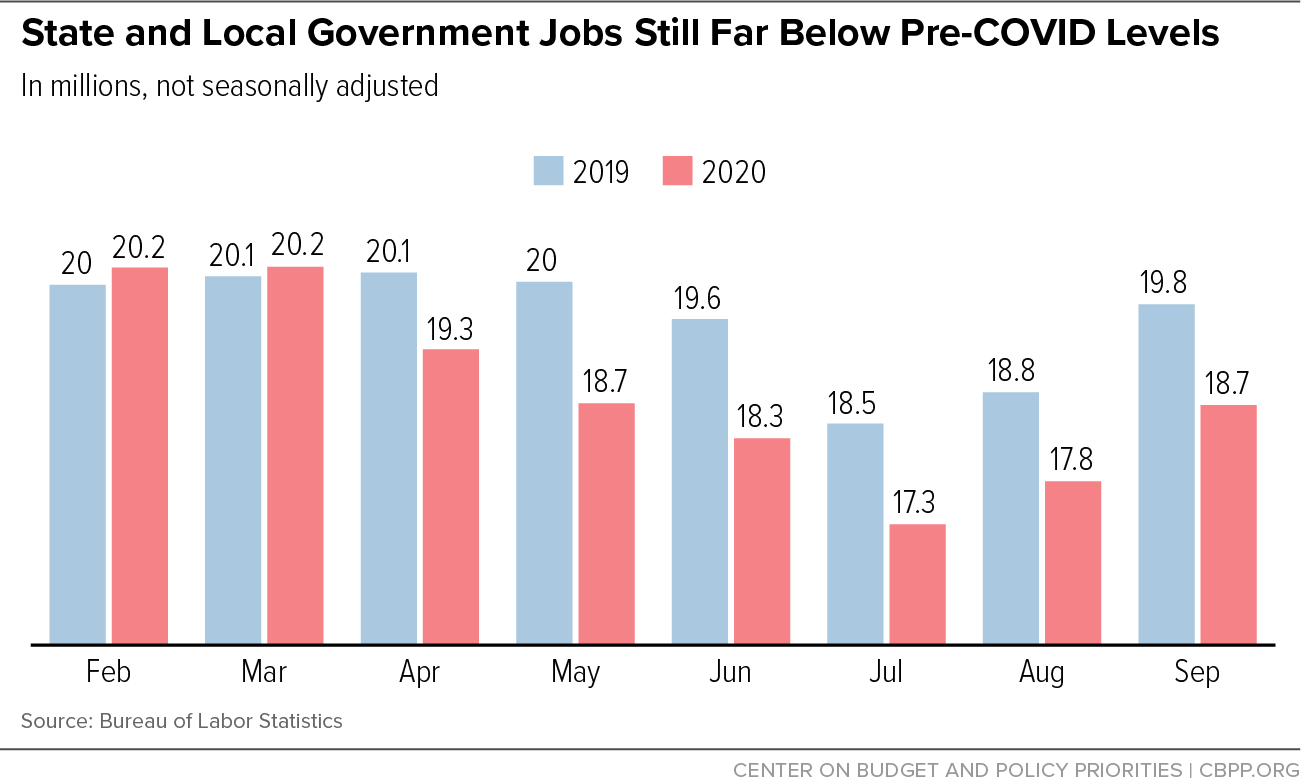 More than 70 percent of the lost state and local jobs are in education, both K-12 and higher education. As my colleague Wes Tharpe detailed last month, states and school districts furloughed or laid off hundreds of thousands of education workers in the spring, from teachers in Massachusetts to bus drivers in New York. Half of the lost K-12 jobs in March and April were among special education teachers, tutors, and teaching assistants, according to the Economic Policy Institute. Large losses also occurred among counselors, nurses, janitors, and maintenance workers.

The September jobs data suggest that most of these education workers weren’t rehired when the new school year began. In addition, new layoffs and furloughs of other education employees apparently offset most of the modest rehiring that has occurred. That’s partly because many states and localities — struggling to balance their budgets, as they are required to do each year — have sharply reduced their support for K-12 schools and higher education institutions. Colorado, for example, cut support for schools by $500 million, and Georgia cut it by nearly $1 billion. And states such as Maryland, Missouri, and Nevada have significantly cut college and university funding.

That’s particularly troubling given that, as my colleague Liz McNichol documented, more education cuts and other harmful service cuts are coming unless the federal government provides more aid. For example, California plans to proceed with nearly $1 billion in cuts to its higher education systems and $6.6 billion in payment delays for schools and community colleges, along with other cuts, unless more federal aid arrives by October 15.

Moreover, most school districts and many colleges and universities are operating this fall in a partially or entirely virtual environment, reducing the need for people like food service workers, security staff, and bus drivers but imposing new costs in technology, protective equipment, and other areas. Furloughing workers less critical in a virtual environment may help districts avoid deeper cuts elsewhere for now but, when districts eventually call back some of those workers, they’ll face renewed pressure to cut elsewhere, such as by reducing teacher positions or cutting enrichment activities, unless they receive more federal aid.

Furthermore, while more than 800,000 of the 1.1 million laid off or furloughed state and local workers are in education, that leaves 300,000 other state and local workers who also have lost their jobs, largely due to state budget cuts. The loss of these workers — including health care workers, firefighters, and others — adds to the severe problems that many states and localities are facing in delivering needed public services during a pandemic.

The bottom line: the federal government needs to step up. As Federal Reserve Chairman Jerome Powell said yesterday, “The recovery will be stronger and move faster if monetary policy and fiscal policy continue to work side by side to provide support to the economy until it is clearly out of the woods.” That support should include robust additional relief for states and localities.

October 2, 2020
PreviousLatest Data: 1 in 3 Adults Having Trouble Paying Expenses
NextFor Most Americans, Retirement Accounts Are Paltry
Stay up to date
Receive the latest news and reports from the Center