States’ Higher Ed Funding Remains Down, but Some Are Starting to Reinvest

Consider these facts (adjusted for inflation):

The better news:  in the last year, 42 states increased funding per student, by an average of roughly $450 per student, or 7 percent.

That’s an important first step toward rebuilding states’ higher education systems, as a large and growing share of future jobs will require college-educated workers.  Sufficient funding for higher education to keep tuition affordable and quality high at public colleges and universities, and to provide financial aid to those students who need it most, would help states to develop the skilled and diverse workforce they will need to compete for these jobs.

Such funding won’t likely occur, however, unless policymakers make sound tax and budget decisions in the coming years.  A slow economic recovery and the need to reinvest in other services that state lawmakers also have cut deeply means that many states will need to raise revenue to rebuild their higher education systems.  At the very least, states must avoid shortsighted tax cuts, which would make it much harder for them to invest in higher education, strengthen the skills of their workforce, and compete for the jobs of the future. 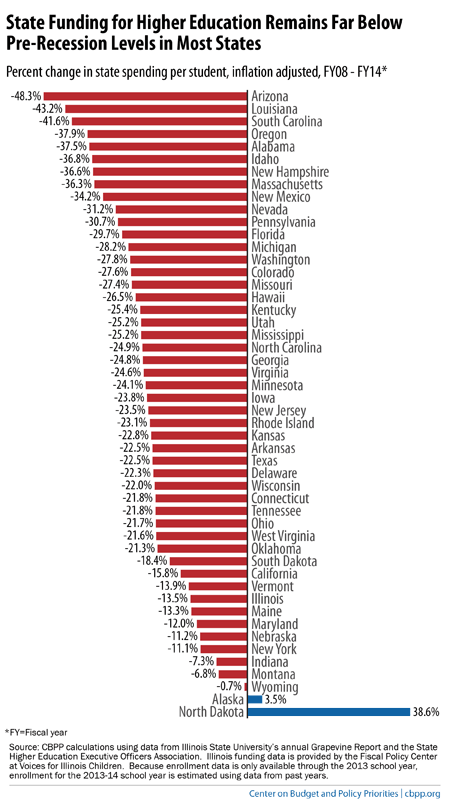 January 22, 2014
PreviousExpansion of Community Eligibility Reaches Milestone
NextUpdate: Where Things Stand for the Unemployed
Stay up to date
Receive the latest news and reports from the Center