Wisconsin’s Governor Scott Walker and New York’s Governor Andrew Cuomo, as well as leading lawmakers in Michigan and elsewhere, are using their state’s budget “surplus” to justify new tax cuts.  That’s highly imprudent, if not irresponsible. State budget surpluses typically appear when the economy emerges from recession.  After a few years of weaker-than-expected revenues, states wisely tend to estimate revenue cautiously for the coming year.  If their estimates prove too cautious — for example, because the stock market does better than expected, raising people’s incomes and thus their tax payments — that produces a “surplus.” Some governors and legislators love these surpluses because they seem like free money that policymakers can use as they please — like spend on tax cuts.  But that approach ignores three key facts: First, a surplus means the state has more money than it expected, not necessarily more money than it needs.  Having experienced the worst recession since the Great Depression, states’ needs remain high.
Image 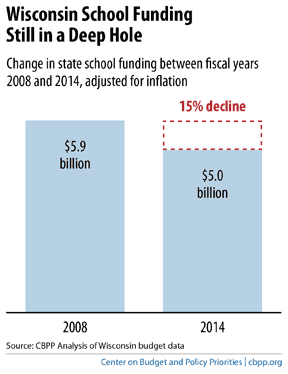 Most states — including Michigan, New York, and Wisconsin — provide less general support for their schools per student than they did when the recession hit, often far less. Wisconsin has cut school funding especially deeply (by 15 percent), making Governor Walker’s call for tax cuts particularly rash (see graph). Second, recovery from the Great Recession remains fragile, as December’s unexpectedly weak jobs report showed.  And who knows how the stock market will perform in 2014? After growing by 20 percent over the last year, it could take a tumble.  If the economy slows and the stock market slips, states surpluses will disappear. Third, tax cuts are a lousy way to grow a state’s economy.  They do little or nothing to create jobs, and money spent on tax cuts can’t be used to improve schools, strengthen early education, repair infrastructure, or make other proven investments in a state’s economic future. Other states with surpluses are taking a more responsible approach.  California’s Governor Jerry Brown, for example, is calling for putting much of the money into paying off state debt and building up reserves.  This approach still leaves many state needs unaddressed, but it’s wiser than the approach that policymakers in Wisconsin, New York, and Michigan are considering.
Related Posts:
Topics:
State Budget and Tax
PreviousIllustrating Income Inequality: A Recap
NextCongress Has Already Agreed to its 2015 Budget Plan
Stay up to date
Receive the latest news and reports from the Center