States Are Starting to Save for Another Rainy Day

With the budget challenges of the Great Recession and its aftermath still fresh in their minds, state policymakers are considering ways to strengthen their “rainy day funds” — budget reserves they can use when recessions or other unexpected events cause revenues to fall or spending to rise.  But, it’s still premature for most states to act aggressively to refill the funds until their revenues rise well above pre-recession levels, unemployment has declined further, and they have restored programs cut during the recession, as we explain in a new paper.

States used their rainy day funds to avert over $20 billion in cuts to services, tax increases, or both, in each of the last two recessions, highlighting the funds’ importance.  Since draining reserves to a low of 2.4 percent of spending in state fiscal year 2010, states have begun to refill them partly (see chart). 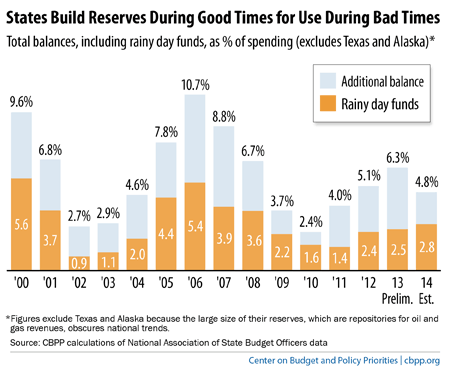 The decisions about when and how quickly to refill a rainy day fund will be different for each state.  Here are some questions that states should consider: