State cuts to higher education funding have been the major driver behind the large tuition increases at public two- and four-year colleges in recent years.  Claims that rapid increases in administrative and support staff are ballooning campus budgets are overstated.

States have cut $13.3 billion from annual funding for higher education since 2008, after adjusting for inflation — or roughly $1,800 per student.  Every state except Alaska, North Dakota, and Wyoming spent less per student in the 2014-15 school year than before the recession.

These cuts have led to steep tuition increases that threaten to put college out of reach for more students.  Annual published tuition at four-year public colleges has risen by $2,068, or 29 percent, since the 2007-08 school year.  Many public colleges have also scaled back important campus services like computer labs and library services.  (A major report we issued in May has the details, including state-by-state figures.)

Some argue that the real culprit behind rising tuition is the rapid growth in administrative staff – that is, executive and managerial staff along with professional and student services-oriented staff, or basically all staff not focused on teaching or research.

A report from the think tank Demos, using revenue and spending data gathered by the Department of Education, explored a number of potential causes for rising tuition between 2001 and 2011.  It found that: 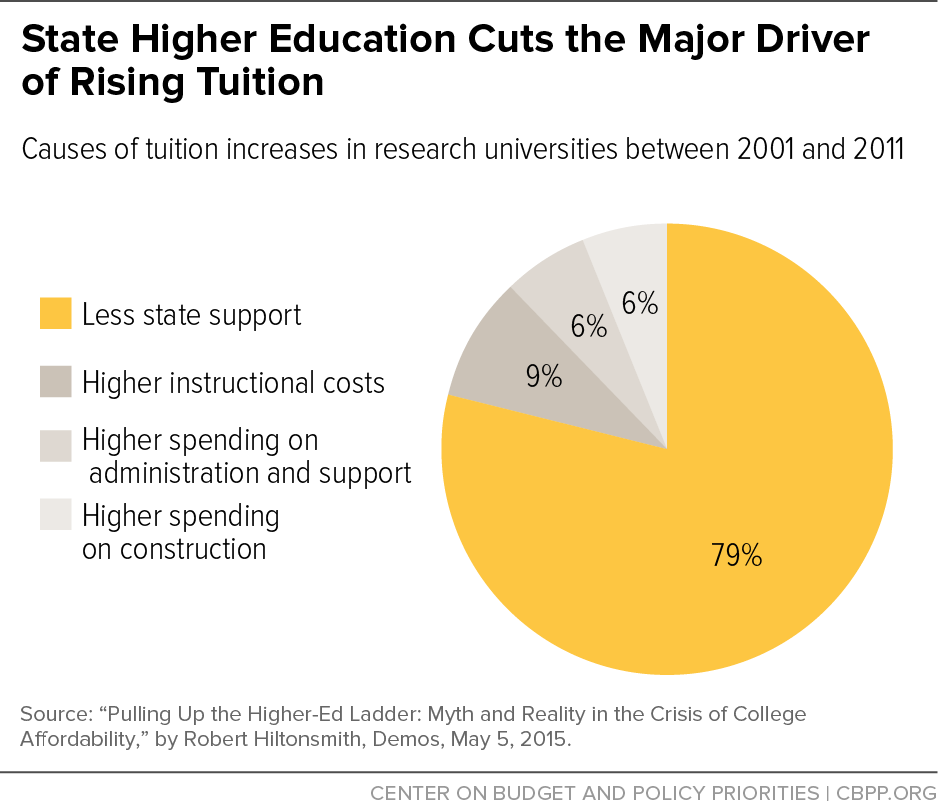 Consistent with these findings, our own research shows that as states have begun reinvesting in public higher education over the past two years, tuition hikes have been much smaller.  Average tuition rose $107, or 1.2 percent, above inflation in the 2014-2015 school year.  In 16 states, tuition fell modestly, with declines ranging from $6 in Ohio to $182 in New Hampshire.

Public colleges should work to provide high-quality education as efficiently as possible.  But at the same time, policymakers should do their part by providing adequate funding.

October 16, 2014
PreviousIn Case You Missed It…
NextMore Transparency on Business Tax Breaks
Stay up to date
Receive the latest news and reports from the Center