An update of this paper is available here.

States are providing less per-pupil funding for kindergarten through 12th grade than they did seven years ago — often far less.  The reduced levels reflect primarily the lingering effects of the 2007-09 recession.  At a time when states and the nation need workers with the skills to master new technologies and adapt to the complexities of a global economy, this decline in state educational investment is cause for concern.

K-12 schools in every state rely heavily on state aid.  On average, some 46 percent of total education expenditures in the United States come from state funds; the share varies by state.

States typically distribute most of this funding through formulas that allocate money to school districts.  Each state uses its own formula.  Many states, for instance, target at least some funds to districts that have higher levels of student need (e.g., more students from low-income families) and less ability to raise funds from local property taxes and other local revenues, although this targeting typically is insufficient to fully equalize educational expenditures across wealthy and poor school districts.[5]

This substantial reliance on state aid means that cuts to state formula funding generally force local school districts to scale back the educational services they provide, to raise more revenue to cover the gap, or both.

In addition to the funding they distribute through general aid formulas, states may or may not use separate allocations to fund items such as pupil transportation, contributions to school employee pension plans, and teacher training.  Those allocations typically are smaller than general aid funding. (See Appendix Table 2 for trends in total state funding for schools, based on Census Bureau data available through the 2011-12 school year.)

For 47 states, the necessary data are available to compare this year’s allocations for the first category of funding, general formula funding, with funding before the recession hit.[6]  The 47 states included in this analysis are home to 96 percent of the nation’s schoolchildren.

Most states increased their per-pupil school funding in the last year (see Appendix Table 1), but in most cases those increases were not enough to offset the funding cuts those states made in earlier years.

States cut funding for K-12 education — and a range of other areas of spending, including higher education, health care, and human services — as a result of the 2007-09 recession, which caused state revenue to fall sharply.  Emergency fiscal aid from the federal government initially helped prevent even deeper cuts, but it ran out before the economy recovered, and states chose to address their budget shortfalls disproportionately through spending reductions rather than a more balanced mix of service cuts and revenue increases.  Cuts have been particularly deep when inflation and other cost pressures are considered.

States’ large cuts in education spending have had serious consequences for the economy.  Local school districts typically struggle to make up for major state funding cuts on their own.  As a result, deep state funding cuts have led to job losses, deepening the recession and slowing the economy’s recovery.  Such cuts also have counteracted and sometimes undermined important state education reform initiatives at a time when producing workers with high-level technical and analytical skills is increasingly important to the country’s prosperity.

Property values fell sharply after the recession hit, making it difficult for local school districts to raise significant additional revenue through the property tax to make up for cuts in state funding.

Property values have improved since then but remain below pre-recession levels nationally.  Further, property tax revenue in most states has not yet fully captured the property value increases that have occurred.  (There’s generally a significant time lag between when home prices rise and when property tax assessments register the increase.)[11]  Local school districts can pursue property tax rate increases, but those increases usually are politically difficult and sometimes legally restricted.  For all these reasons, property tax revenue growth nationwide has been modest; revenues rose about 1.4 percent above inflation annually from the beginning of 2012 through the beginning of this year.[12]

Beyond increasing local revenues, school districts’ options for preserving investments in education services are very limited.  Some localities could divert funds from other services to shore up school district budgets, but this would sustain education spending at the expense of other critical services like police and fire protection.

State education cuts have counteracted and sometimes undermined reform initiatives that many states are undertaking with the federal government’s encouragement, such as supporting professional development to improve teacher quality, improving interventions for young children to heighten school readiness, and turning around the lowest-achieving schools.

Deep cuts in state spending on education can limit or stymie education reform efforts by limiting the funds generally available to improve schools and by terminating or undercutting specific reform initiatives.  Reforms endangered by funding cuts include:

State education budget cuts have slowed the pace of economic recovery by reducing overall economic activity since the recession officially ended in mid-2009.  The spending cuts have caused school districts to lay off teachers and other employees, reduce pay for the education workers who remain, and cancel contracts with suppliers and other businesses.  These steps remove consumer demand from the economy, which in turn discourages businesses from making new investments and hiring. 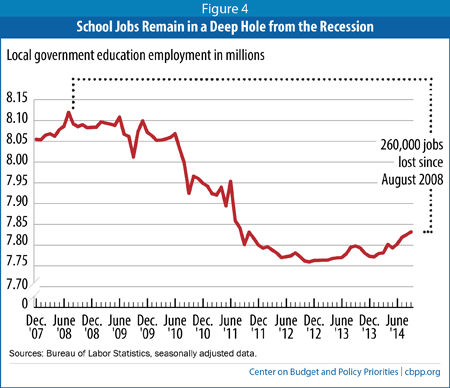 Federal employment data show that school districts began cutting teachers and other employees in mid-2008, when the first round of budget cuts began taking effect.  By 2012, local school districts had cut about 330,000 jobs. Since then they’ve added back a portion of the jobs, but still are down 260,000 jobs compared with 2008.[20]  (See Figure 4.)  This decline is highly unusual; normally, local education employment grows each year to keep pace with an expanding student population.  In addition, education spending cuts have cost an unknown but likely large number of additional jobs in the private sector as school districts have canceled or scaled back private-sector purchases and contracts (for instance, purchasing fewer textbooks).  These job losses shrink the purchasing power of workers’ families, which in turn affects local businesses and slows recovery.

The education funding totals presented in this paper reflect the funding distributed through states’ major education funding formulas.  The numbers do not include any local property tax revenue or any other source of local funding.  For total state and local funding changes through the 2011-12 school year, see Appendix Table 2.

Finally, Hawaii, Indiana, and Iowa are excluded because the necessary data to make a valid comparison are not available.

[1] Virginia Andersen and Alison Miller gathered much of the data analyzed in this report.

[6] For the remaining two states, Indiana and Hawaii, education funding data are published in ways that make it difficult to make accurate historical comparisons.  The District of Columbia is excluded because it is a city that operates a single school district with no distinction between state and local funding.  See appendix for more details about our methodology.

[7] In one of these states—Nevada—this year’s drop in state funding took place automatically, in response to an increase in local funding for schools.  (The increase stems from higher property tax revenues due to rising housing prices and higher revenue from a local sales tax that helps fund schools.)  While local funding for K-12 may have risen in some other states this year as state funding has fallen, it has not risen enough in most states to offset the very deep cuts many states have enacted since the recession hit.

[10] CBPP analysis of data from the Office of Management and Budget.

[12] CBPP analysis of data from the U.S. Census Bureau’s Quarterly Summary of State and Local Taxes, extracted on September 22, 2014.