State and Local Governments Shed Another 10,000 Jobs in August

State and local governments cut another 10,000 jobs in August, according to today’s jobs report, which means that they’ve now cut 716,000 jobs since August 2008 (see chart).  While they imposed their steepest losses in 2009 and 2010, the cuts unfortunately have been all too consistent:  they’ve cut workers in 20 of the last 24 months. 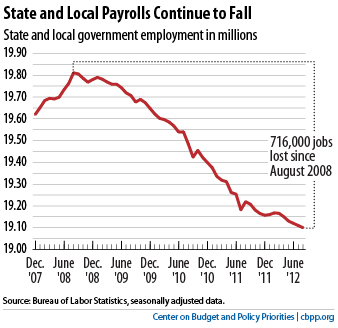 The 10,000 jobs cut in the past month included 4,600 education jobs like teachers, librarians, and other school support staff.  The deep cuts that many states have made to K-12 education since the start of the recession have cost more than 300,000 school jobs in the past four years, as we describe in the paper that we released earlier this week.  (In 17 states, K-12 education funding is more than 10 percent below pre-recession levels.)  These cuts often mean fewer teachers in the classrooms or increases in class size — changes that undermine student achievement and harm states’ ability to build their economies in the long term.

The State and Local Drag on the Recovery

June 8, 2012
PreviousToday's Jobs Report in Pictures
NextLooking Ahead to Next Week’s Poverty Figures
Stay up to date
Receive the latest news and reports from the Center