| By Kathy Ruffing
The National Senior Citizens Law Center and Latinos for a Secure Retirement will host an event tomorrow to spotlight Supplemental Security Income (SSI) — an important but oft-ignored program that provides cash income to people who are disabled, blind, or elderly and have little income and few assets — and discuss ways to improve it. President Nixon and Congress created SSI in 1972 to replace the matching grants to states that had created what the Social Security Administration (SSA) called a “crazy quilt” of aid to the aged, blind, and disabled.  SSI is distinct from the Old-Age, Survivors, and Disability Insurance (OASDI) programs commonly known as Social Security, though many SSI recipients have worked enough that they also collect Social Security and SSA runs both programs. In December 2012, 8.3 million people collected SSI:  2.1 million people aged 65 or older, 4.9 million disabled adults aged 18-64, and 1.3 million severely disabled children under age 18.  Until the deep economic downturn generated a modest uptick, SSI participation had generally been flat or falling as a share of the population since at least the mid-1990s (see graph).
Image 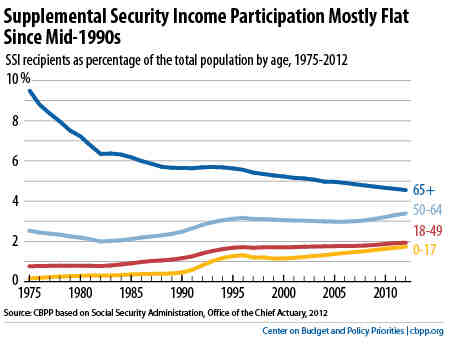 SSI benefits alone don’t lift recipients out of poverty; the maximum benefits for individuals and couples (when both spouses qualify) are about 74 percent and 83 percent of the poverty level, respectively.  But SSI is instrumental in reducing extreme poverty (incomes below half the poverty line).  SSI benefits are lower when recipients have other income (or live in a Medicaid facility or with relatives who provide support), so the average federal payment is $500 a month. Improvements in SSI should aim to boost participation among eligible people and make benefit levels more adequate.  Possible reforms include raising the basic benefit, raising and indexing the badly outdated asset and income limits (the asset limits have been frozen since 1989),
changing rules
that discourage saving for retirement, and extending SSI eligibility for elderly or disabled refugees, a uniquely vulnerable group.
Related Posts:
Topics:
Disability, Poverty and Inequality, Social Security